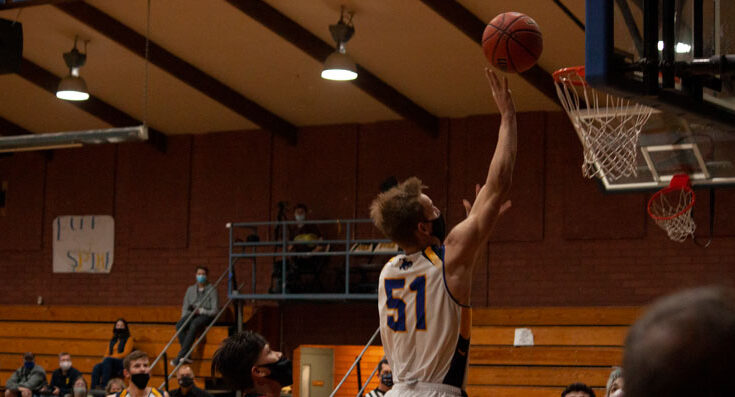 PIMA – In a way, you could say it was a victory for both teams simply by being able to play the game in the midst of the worldwide coronavirus pandemic. In a more literal sense, it was a victory for the Roughriders, who never trailed the Tigers and thoroughly defeated the visiting team 81-46.

Yes, there was only a smattering of fans in the gymnasium, and everyone had to wear masks, but that didn’t matter to the players and coaches who were thrilled to finally be able to play and coach the sport they love.

“It’s been 11 months since we played a basketball game,” said Pima head coach Cliff Thompson. “We were excited to play again. We didn’t care how many people were in the stands, where the game was, or who the opponent. We didn’t care. We just wanted to play somebody besides ourselves . . .”

“It’s been a struggle,” Rios said.

Globe moved up to 3A this season and in in the Metro East Region with Phoenix-area private schools including American Leadership Academy-Ironwood, Benjamin Franklin, Eastmark, and Gilbert Christian. Rios said he was glad to get to play a traditional basketball powerhouse such as Pima.

Globe’s big man, C. Chee, led the way for the Tigers with 14 points, followed by N. Perez with 13 points (three, 3-pointers), and V. Lomayaktewa with 9 points.

“They learned some things here,” Rios said. “We’re all sophomores and freshmen except for three seniors, so we’ve got some growing up to do. We had spurts where we played with them. I mean, we were going back and forth and making some stops. We ran our offense and got good looks. And I think that’s what they need to realize.”

While offense gets the glory, defense wins championships and often leads to fast-break offensive opportunities for easy buckets. The Roughriders started out its season by holding the Tigers scoreless for nearly the entire first half of the first period on their way to open an 11-0 lead with a balanced inside/outside attack.

“If we’re going to be good we gotta be a good defensive team,” Thompson said.

The Roughriders exploited the Tigers’ zone defense with a barrage of baseline 3-pointers in the first half. Kenton Skiba and Kaleb Blair were the team’s splash brothers, as they rained down 3’s from opposite corners. Skiba hit an obscene 7-12 from deep in the first half (with five coming in the second quarter alone) on his way to a game-high 21 points, and Blair hit an outstanding 80 percent from deep, going 4-5 from beyond the arc in the first half and finished with 16 points on the night.

Helping facilitate the scoring, guard Reggie Stewart had 7 assists, and point guard Tim Salyer had 5 dimes of his own to go along with 5 rebounds.

“This is a competitive school in basketball and that’s what we want,” Rios said. “This year, we’re in a really super tough league . . . We’ve got our work cut out for us.”

That work continues Wednesday night when Globe will host the Thatcher Eagles, starting at 7 p.m.

With a comfortable lead, the starters played sparingly in the third period and no senior played in the fourth period at all.

“I thought we played hard,” Thompson said. “There’s some things we gotta work on. We got six seniors and six sophomores; that’s our team. That whole fourth quarter was the sophomores and they’re talented – they just gotta learn. There’s some things we just gotta work on defensively . . . We’re going to get to a point where the seniors and the sophomores mesh really well. If we could do that, we could be a pretty good team.”

Pima will next host the Benson Bobcats on Friday, starting at 7 p.m.

In other local action:

Fort Thomas lost to Patagonia, 25-32. The Apaches travel to San Simon on Wednesday for its next contest, starting at 7 p.m.

The Pima Roughriders girls basketball team traveled to Safford to take on the Bulldogs and left victorious, 57-25.

The Roughriders led 35-15 at the half and continued to pour it on while limiting the Bulldogs to just 10 points in the second half.

Duncan defeated San Simon, 24-20. The Wildkats will next host Anthem Prep on Wednesday, starting at 4:30 p.m.