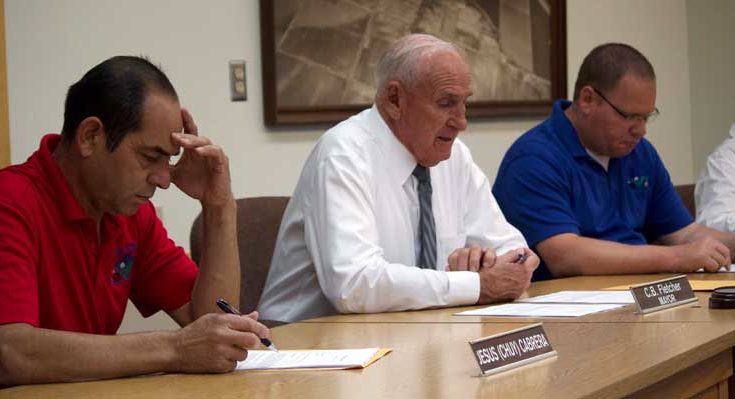 PIMA – After roughly 20-30 years at the same rate, the mayor of Pima and other members of the town council will be getting a bump in pay.

Pima Town Manager Sean Lewis brought up the topic of increasing the compensation paid to the council members. He said while he didn’t think about it during his first 12 years working for the town, now, as town manager, seeing the increase in activities that the council members and mayor attend and help out with an increase in pay was necessary.

Currently, as per town code, the mayor and council members are all paid $50 per each meeting attended. Normally Pima only holds one meeting per month, but sometimes special sessions are necessary and there have been times when three meetings were held during a one-month time period.

At the council’s July 2 meeting, Lewis proposed moving to a flat monthly rate instead of a per-meeting rate.

During the discussion, all of the council members said they didn’t run for council for the money and that none of them even knew it was a paid position. While they were not particularly interested in raising their own compensation, each council member said Pima Mayor C.B. Fletcher should have his increased for what he does for the community.

Lewis advised that only increasing the mayor’s pay and none of the rest of the council could be detrimental in that not every mayor is as hands-on as Fletcher.

“Two years ago we had a mayor (who) lived in a different state and a council that maybe showed up to all the meetings,” Lewis said.

For his part, Fletcher thanked the council for their kind words and said each of them also deserved an increase. He said he would be fine with whatever amount they came up with for him, but that he believed the council members should have their pay increased.

“I think you deserve an increase in pay, I really do,” Fletcher said. “Like I said, we’re paying for your wisdom, your understanding, your dedication, and loyalty. And that’s worth more than physical payment.”

Lewis advised that the council should take heed in what they decided because he didn’t want to revisit the situation in two years to go in the opposite direction.

“Be careful with what you do,” Lewis said.

Councilor Sherrill Teeter agreed with Lewis and said that with a changing council the compensation should reflect an amount that someone would want to do their best at their position and it would encourage those to actively seek a position on the council. For the next election, each councilor is running unopposed.

Lewis also said that with a raise he would feel more emboldened to request assistance from the mayor and council members to help out at special events and other activities.

“There’s a reason for this other than I want you guys to have $100 a month,” Lewis said. “So, please look at the entire picture.”

Earlier, Lewis had recommended making the monthly payment $250 for the mayor and $125 for each councilor.

After some discussion, the council recommended increasing the mayor’s pay to $300 per month and each councilor’s pay to $150 per month.

A change in the town’s ordinance will have to go through two separate readings over the next two months and the council invites the public to attend its next meeting Aug. 6 at 7 p.m. at Pima Town Hall in which the first reading could occur, so the council can gather feedback from the public.