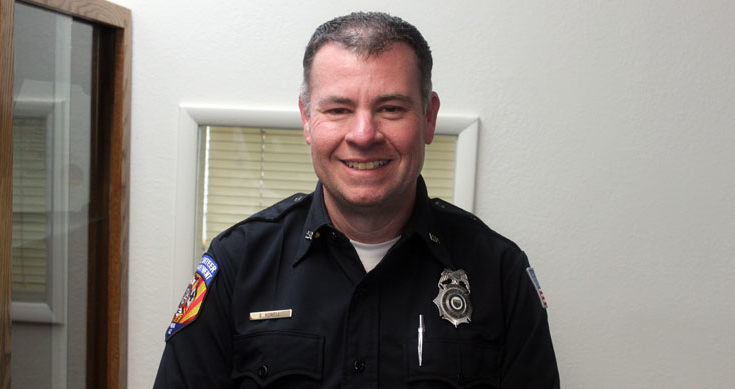 PIMA – After six years holding the reigns of the Pima Fire Department, Adam Hoopes has stepped down as chief and Scott Howell was voted in to become the town’s new fire chief.

Howell – who is coming up on serving 20 years on the department this August – was introduced at the Pima Town Council’s Tuesday night meeting. He told the Gila Herald that he actually moved from Thatcher to Pima just to join the fire department.

“I was a paramedic at the time and I wanted to be a part of the EMS and fire program in Pima, so I moved on down.”

Hoopes decided not to run for re-election for fire chief and that it was time to give himself a break and someone else the honored duty. He told the Gila Herald that he has full confidence in Howell doing an excellent job and that his family fully supported his decision.

“It was time,” Hoopes said. “Scott has many talents and abilities that our department will greatly benefit from. He will do great! And my family will be happy with me home a little more . . .”

Recently, the Pima Fire Department received a brand new red metal roof for its fire station thanks to a $49,000 grant from the Freeport McMoRan Foundation’s Community Investment Fund and a new pumper truck thanks to the town of Pima. With its renown EMS program, a new roof at its facilities, new equipment and now new fire chief, the Pima Fire Department looks to move on with a successful 2019 in protecting the town and surrounding area.

“We just continue to train and improve our ability to respond to calls and serve the community,” Howell said. “We’ve got an excellent group of men and women who are members of the department that have a lot of skills and training and experience, so we’re going to keep going with what we have and help the community.”