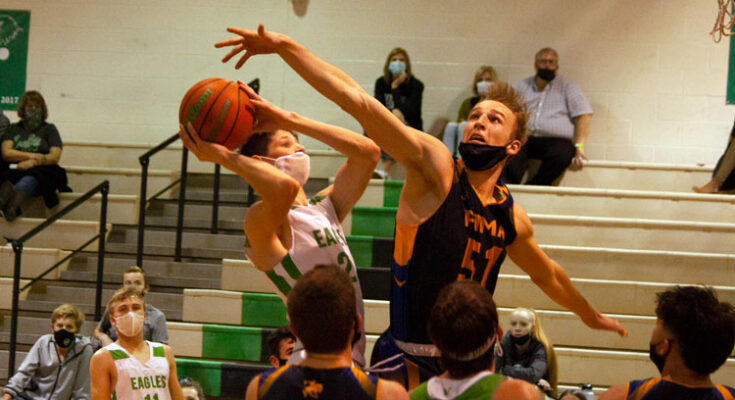 THATCHER – With ice water in his veins, sophomore Grant Ashby went to the line with 12.9 seconds left in the game as Pima cringed to a 2-point lead. Ashby then cooly sunk both shots to help the Roughriders escape the Eagles’ Roost with a 59-53 victory.

“He (Ashby) played really well for us,” said Pima head coach Cliff Thompson. “He knocked down both of those free throws like he was a senior.”

After Ashby’s free throws, Thatcher’s sharpshooter Michael Greer raced down the court for a quick two, but his attempt bounced off the rim. The rebound got knocked backward into the hands of Pima’s Kaleb Blair, who zipped the other way for a layup to finish the game.

“They played a heck of a game and it was awesome,” said first-year Thatcher head coach Kyle Hull. “I love those kinds of games. Bring it anytime. Let’s do it again.”

It was a back-and-forth game in the first period that turned toward Pima’s favor as Roughriders Jacob Brimhall and Ashby asserted themselves down low.

Brimhall, who finished with 9 points on a shorted game due to fouling out, broke a 4-4 tie with back-to-back buckets. The aforementioned Ashby, who had a team-high 14 for Pima, was fouled with just .3 of a second left in the period and sunk both foul shots to give the Roughriders a 17-11 lead after one period of play.

“The only person who stopped him (Brimhall) was himself with foul trouble,” Thompson said.

Points were at a premium early in the second period, but Thatcher’s Hudson Griffin hit a trey to pull the Eagles within three, 17-14.

Thompson also pointed out the defensive play by Kenton Skiba (who is more thought of as a deep-threat scorer) and the overall play of Reggie Stewart – who went toe-to-toe all night long against Thatcher’s Tanner Palmer.

“I thought Reggie played well before he fouled out,” Thompson said. “We struggled with foul trouble. So did they, but we gotta be a little bit smarter.”

The Roughriders went on a run in the second period with six straight points at one time and eventually pulled ahead by 11, 31-20. However, T.J. Reed hit from deep and Griffin had a second 3-pointer just before the half to cut into the lead. Pima’s Coy Miller answered Griffin’s shot by racing the ball back down the court and hitting a buzzer-beater to give Pima the 36-28 lead at the half.

Thatcher’s Bradley Curtis was consistent throughout the entire game and made a big 3-point play the old fashioned way in the third. Curtis, who seems to still be growing into his size, finished with a game-high 15. Long balls by Greer (14 points) and Brandon Napier (7 points) kept Thatcher within closing distance as Pima’s ace Kenton Skiba hit two of his three 3-pointers in the period on his way to scoring 11 points on the night. The Roughriders went into the fourth up 48-41, but the game was far from over.

The defense was stifling at the start of the fourth, with nobody scoring in the first couple of minutes of play. Pima then hit three shots to only one for Thatcher and enjoyed a 9-point lead.

However, Brimhall fouled out with about 4 minutes left to play, and the Thatcher full-court press defense appeared to trouble Pima, forcing multiple turnovers.

That allowed the Eagles to claw their way back into the game behind buckets by Curtis and Greer.

“We know how to press break,” Thompson said. “I think we became way too passive instead of attacking. It’s something we’ve gotta work on and make sure we’re more prepared the next time we see it.”

Pima got a 3/4-court pass to an open Skiba for an easy bucket to go up 5. But with about a minute left to play, Napier drove to the middle, drawing Pima’s Tim Salyer to help on defense. As Salyer dropped down, he left Greer open on the wing and the senior sharpshooter nailed the long ball to cut the lead to 2, 55-53.

Pima then got a good look but failed to convert and Thatcher came back down looking to tie or go up as the clock ticked down. After swinging the ball, Napier drove to the right and tried a mid-range jumper that clanged off the rim. The loose ball was picked up by Pima’s Seth Russell, who got it out to Salyer.

Pima then swung the ball around and Thatcher was forced to foul Ashby with just 12.9 seconds remaining. Just as he did at the end of the first period, Ashby calmly sunk the two free throws and along with it Thatcher’s chance at a comeback as the Roughriders remained unbeaten having passed their first true test of the season.

After the game, Hull lamented on his team’s problems at the end of games in the early going of this season.

“If we could close one out it would be a miracle,” Hull said. “That’s what we’ve been struggling with the last few games. It seems like we’ve had the momentum, had the scoring, had the opportunities, and we can’t convert. So, I’m just looking forward to another opportunity, and, hopefully, we’ll close one out.”

The Morenci Wildcats (2-0 conference, 2-0 overall) defeated the Round Valley Elks on Wednesday, 68-50. The Wildcats will travel to St. Johns to play the Redskins on Friday, starting at 3 p.m.