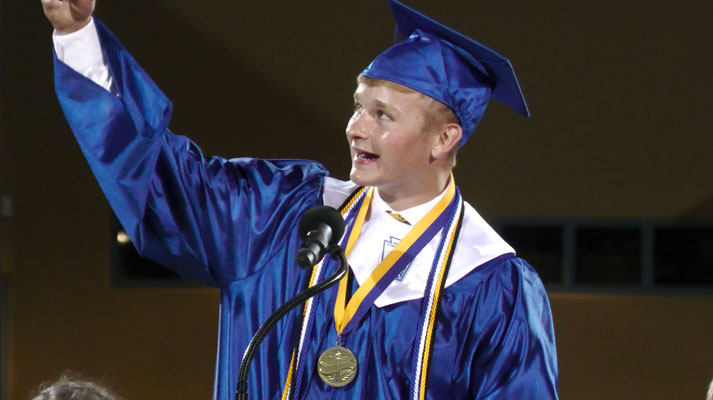 PIMA – For the second year in a row, 74 graduates of Pima High School moved the tassels on their mortarboards from the right to the left signifying their completion of high school. The event took place on a peaceful Wednesday night in the cool of Edd Hubbard Field as a packed stadium of relatives and well-wishers watched.

The vast majority graduated high school already with college credit – some into the double digits – due to dual enrollment with Eastern Arizona College and the GIFT program.

It was also the second year in a row that the school returned to normal graduation ceremonies, including a full audience, special musical number, and talks from the graduates, including the Salutatorian Briana Duran, and Valedictorian, Justin James.

Eastern Arizona College Biology Instructor Aaron Burk – who also teaches a class at Pima High School and is involved with the GIFT dual enrollment high school/college program – was the Keynote Speaker for the evening. He told the graduates that while they may be finished with high school they should never stop learning.

“Obviously you guys are at a milestone in education tonight,” Burk said. “And that milestone is really important. You’ve worked really hard to get here. But, I don’t want you to think that it’s over tonight. In fact, there’s a reason that we call this ceremony commencement. This is when your real education begins.”

After a welcome by Kamri Lofgreen and colorful class histories by Kelsee Pearson and Mason Palmer, Salutatorian Briana Duran gave her speech and complimented her classmates throughout. Summing up, she expressed her positivity for herself and her class and quoted Taylor Swift in saying that we all should simply be nicer to each other.

“‘No matter what happens in life, be good to people. Being good to people is a wonderful legacy to leave behind. If we’re able to accomplish anything together, it should be kindness. It can definitely be hard at times, but hard work has never stopped us and kindness is what has brought us here together and it is what will make us stand out wherever we choose to end up.’ And, to end off, I just want to say I have full faith that each of us will have what it takes to live the lives we dream of.”

A special number by the trio of Hunter Chamberlain, Sarah Blair, and Brielle Ray followed as an interlude between the spectacular scholarly speakers.

James regaled the crowd with a Spicoli-like innocence as he paced through his talk and gave faux-shock that he was where he was. He also touched on the fact that while one chapter may be closing, there are many, many chapters to the book of their lives and it is a choose your own adventure book. He also reminisced about a time when the late-great Kobe Bryant showed his mental tenacity after going up 2-0 in an NBA Finals series.

“A reporter asked him, ‘Kobe, why haven’t we seen a smile out of you?’ And he said something along the lines of, ‘What’s there to be happy about? (The) job’s not finished. Job finished? I don’t think so.’ And I’m here to tell you guys, (the) job’s not finished until we’re six feet in the ground.”

“I just want to challenge you to do whatever makes you happy. Never turn back and never stop fighting because that’s the Pima Roughrider way.”