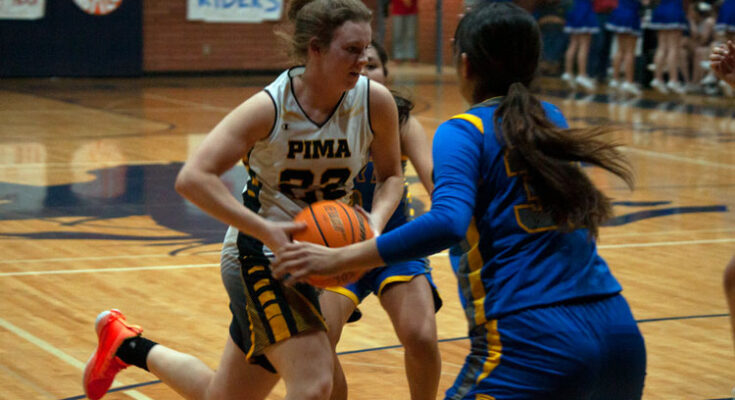 SAN CARLOS – The Pima girls and boys basketball teams swept San Carlos on Thursday night to both improve to 2-0 on the season.

The defending 2A State Champion Pima Roughriders (1-0 conference, 2-0 overall) more than doubled up their opponent for the second time this week/season by blowing out the San Carlos Braves (0-1 conference, 2-1 overall) 70-32.

The Roughriders have a lot of height and a lot of talent they can utilize offensively. On Thursday night, Saydee Allred was a deadeye shot from deep with four 3’s on her way to a game-high 21 points.

While Allred sank shots from deep, Ashlynn Chlarson rocked the rim from the paint and had six of her eight field goals in the first half. Chlarson was too much for the Braves and she finished with 18 points.

Ashlie Sherwood had another complete game and finished with 15 points. Other scorers include Aubrie Sherwood with 8, Maya Mattice with 5, Samantha Pippo with 2, and Ella Wiltbank with 1.

Chloe Willey led the way for San Carlos with 8 points, followed by Ellysia Cutter and Chasity Steele both with 7 each, Camryn Longstreet with 5, Janessa Victor with 3, and Sonnaya Upshaw with 2.