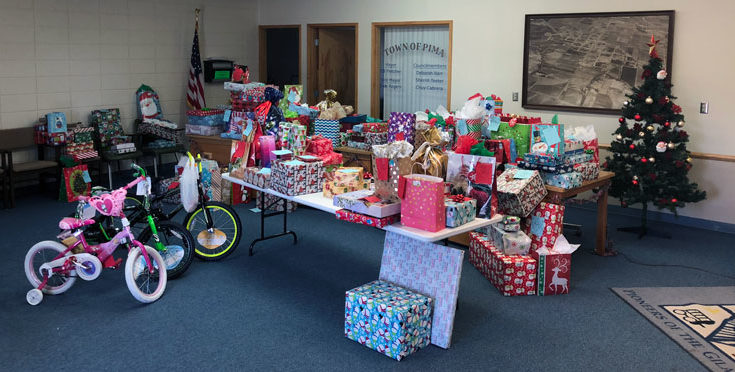 PIMA – Through the diligence of Pima Town Manager Sean Lewis, Councilor Sherrill Teeter, and the compassion of community members, 16 families totaling roughly more than 60 children will have a very merry Christmas in Pima this year.

About 20 wishes were still on the tree when the Gila Herald ran its article on it Dec. 10. Two days later, the tree was picked clean and all wishes were accounted.

On Tuesday, Lewis, Teeter, Pima Police Chief Diane Cauthen and others helped deliver the gifts to the various families.

Each tag listed shoes, shirt and pants, and two toy wishes. The names for the tags were submitted by the local schools and library and all done anonymously, so only the administrators of the program knew the recipients.

Teeter told the Gila Herald that the community and groups went above and beyond what was expected, including additional cash and toy donations, and, in case some wishes were not fulfilled as much as others in the same family, additional gifts were donated as well as goody bags made by a local Webelos Scout troop.

“I’m very impressed with the turnout,” Teeter said. “It has overwhelmed my heart.”

Some of the presents included electronics and games, but the majority listed wishes that included art supplies, books, or items to be used while playing outdoors, including bicycles, according to Teeter. The program catered to all juveniles and ranged in age from 10 months to 17 years.

Teeter said the success of this year’s program has already prompted it to be renewed next year, and she has begun to think of the logistics to make it an even bigger success.