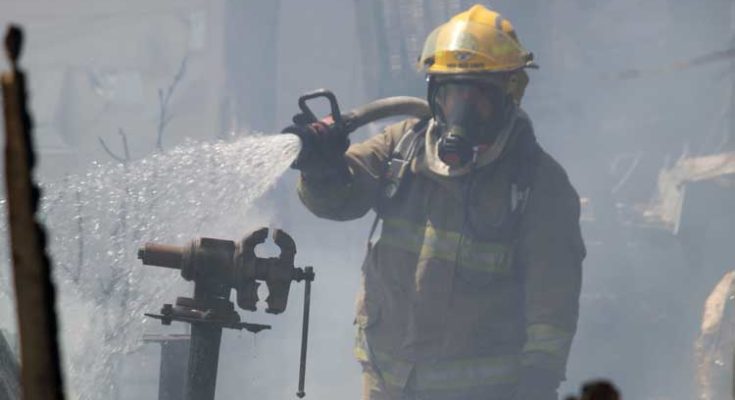 Jon Johnson Photo/Gila Herald: Pima volunteer firefighters, like the one pictured above, managed to knock down a wildland fire along the Gila River on Tuesday.

PIMA – Another day, another fire along the Gila River.

It has been 97 days since the Gila Valley has had any measurable rain and the dry, parched land shows it.

The volunteer Pima Fire Department responded to an area along the Gila River near the Pima Bridge at about 3:16 p.m. on Tuesday regarding a wildland fire.

The fire was described as being west of the bridge next to an all-terrain vehicle (ATV) trail. Firefighters extinguished the blaze, limiting it to about 30 yards by 15 yards. The Pima Fire Department previously responded near the same area May 29, the same day of the eventual 81-acre Gila River fire erupted in Safford. That night, Pima responded to a wildland fire along the Gila River about an hour before the major Gila River fire ignited in Safford and managed to douse the fire in Pima before it got out of hand.

With no lightning or other natural causes evident, Tuesday’s fire is believed to have been human-caused, perhaps even by an ATV that may have stopped in the brush.