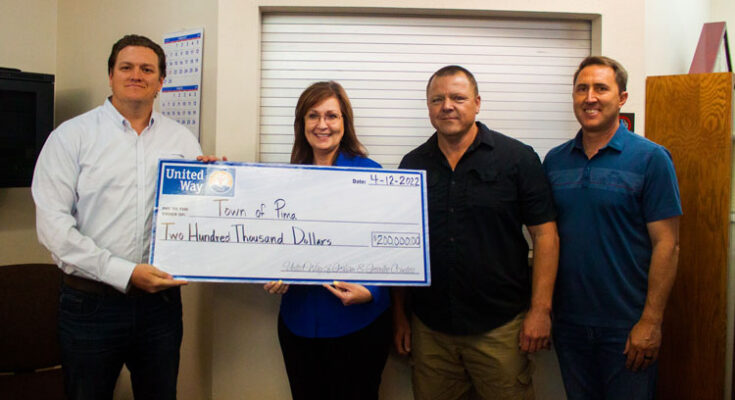 Project is the start of reshaping the recreation complex

PIMA – Big things come from humble beginnings. That was the lesson in Pima on Tuesday night when the United Way of Graham and Greenlee Counties awarded a grant of $200,000 to the town for the improvement and expansion of the Carsen Brown Soccer Fields.

The funds will enable necessary upgrades to the town’s current facilities in order to host a high school soccer team.

“Our ultimate goal is to be able to have a high school team next season,” said Pima Town Manager Vernon Batty. “They’ve talked about doing a season in the fall. That’s a little ambitious to get the fields done by then. I don’t know if that’s really doable or not, but we’ve talked about different options.”

The effort to improve the recreation complex began with three “soccer moms” (Tianna Batty, Michelle Peterson, and MiQuel McRae) who went to the high school with a plan of starting a team. From that beginning, it was decided that better fields would be necessary, according to Pima Town Manager Vernon Batty. One of the major improvements listed was to upgrade the current flood irrigation to sprinklers.

MiQuel McRae began the work on the grant and through the hands of many, it was revised and reworked until it received the $200,000 award by the United Way.

Upon learning of the success of the grant, manager Batty formed a committee involving a variety of experts and community members. The committee met for the first time last week and has already come up with a preliminary master plan. Manager Batty said this was just the first step into a master-planned recreation complex.

“We don’t want to stop with improving (and) expanding our fields,” Vernon Batty said. “We have 80 acres out there that have been given to the town by BLM back in 1965 and the only use for that is parks and recreation. So, we kind of have a fairly blank canvas to work with and Jason (Brimhall) is working on putting together all the different elements that we would like to have there eventually.”

Locally, both Safford and Thatcher have high school soccer teams and Morenci just began its school team this year as well. Eastern Arizona College will begin fielding men’s and women’s soccer teams that will compete in the Arizona Community College Athletic Conference in the fall of 2023.