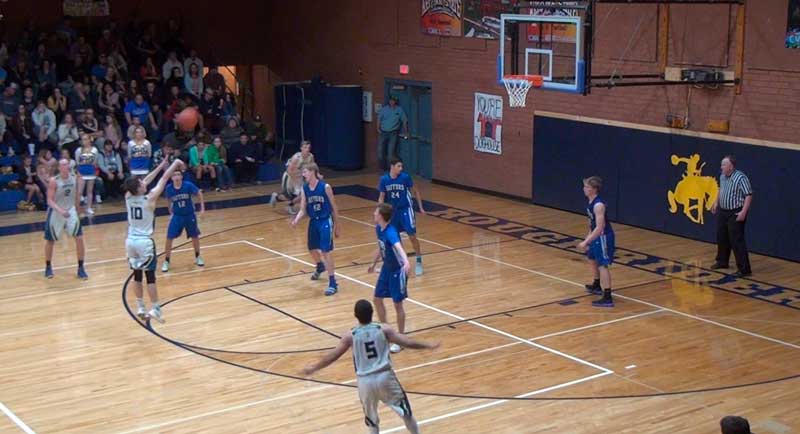 PIMA – After falling to Safford in the EAC Holiday Boys Basketball Tournament, the Pima Roughriders circled Thursday on their calendar to avenge their only loss to an Arizona team this year.

The packed gymnasium was treated to an epic battle between two evenly-matched teams locked in a defensive struggle. As they exchanged blows, Pima’s Dawson Prusynski and Trey Thompson willed their team to victory, 52-42, as the Roughriders pulled away late.

“(It was) a little helter-skelter, but we’ll take it,” said Pima Head coach Cliff Thompson. “The defense was really good on both sides . . . We had to work for every shot we got (and) they did too. That’s why the shooting percentages probably weren’t the greatest, but it was kind of whoever was going to be able to gut out a few plays and play good defense down the stretch. We just made a few more than they did.”

Both teams struggled to score with Safford (5-4 conference, 14-10 overall) only managing 18 points in the first half, while Pruzynski scored 17 points himself in the same time frame. However, the only other scores from Pima (12-0 conference, 20-2 overall) were a period-ending jumper from Trey Thompson and a bucket from Manny Rivera, and the Roughriders went into halftime with a 21-18 advantage.

Coming out of halftime, Pruzynski continued to hurt the Bulldogs by driving past slower defenders after receiving the ball at the top of the 3-point line. When the defenders backed up expecting the drive, Pruzynski took the 3-point shot, and if the defense collapsed he found open 3-point looks for his teammates, including a big shot from Frank Gutierrez at a pivotal point in the game. Pruzynski finished with a game-high 24 points by hitting eight field goals (three 3-pointers) and going 5-6 from the charity stripe.

“I felt like last game I needed to step it up a notch and play better, so that’s what we came out to do and it happened,” Pruzynski said.

It was a battle throughout, however, and Safford stepped up as a balanced team led by Drew Cochran’s 13 points and another 11 from Collin Thompson, who played feisty defense and hounded Pima’s players into turnovers. Collin Thompson also capitalized on a couple of fast-break opportunities.

Dominic Gutierrez also played big for Safford on offense and defense and finished with 10 points, while freshman Jedrique Chavez showed he will be a force to be reckoned with for a long time with his intense play. With Chavez only a freshman and Collin Thompson only a sophomore, the future remains bright for the Bulldogs.

“It was a good game,” said Safford head coach Terry Williams. “I’m proud of my team. Pima is a good team – well-coached, tough team. I think we played well.”

After Pima burst out to a 10-point lead in the third period due, in part, to its smothering team defense, Safford fought back to whittle the lead down to just one, 40-39, with 5:14 left to play behind big buckets from Collin Thompson and a step-back jumper from Andrew Smith.

That was when Pima’s senior point guard Trey Thompson took over, scoring 9 of his team’s final 11 points down the stretch. Thompson handled the rock and broke free from pressure to hit three layups during the stretch and one 3-pointer from the top of the circle to finish with 13 points on the night.

“I felt like it was just our defense that turned it into offense – getting stops down the stretch that pulled out the win,” Trey Thompson said.

Both teams face tough matches again Friday night with Pima hosting Thatcher and Safford headed on the road to face Robert Burries (who averages 31.5 points per game) and the Globe Tigers.

“If we can keep him (Burries) under 40 we might be alright,” Williams said. “He’s a good player. We have to figure out a way to stop him. He’s half their points.”

Cliff Thompson said he liked scheduling back-to-back tough games to help get his team ready for the state playoffs.

“Thatcher is always really tough to deal with, so we’re going to go home, get some rest, ice up (and) come back tomorrow and get ready to play,” he said. “We kind of wanted this because we feel it gets us ready for state, which is two tough games back-to-back both weekends, so we might as well practice it if we can during the season.”