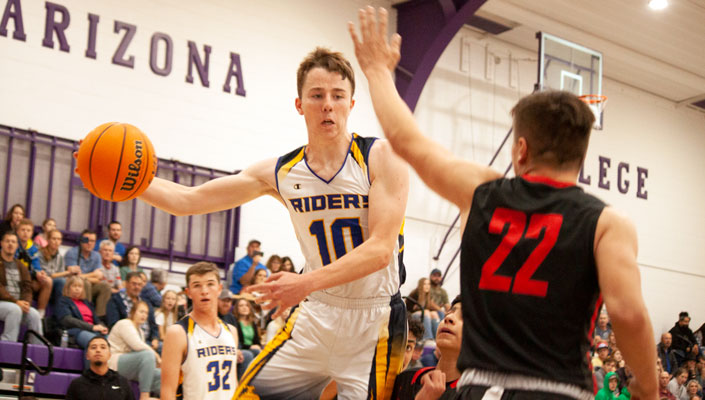 THATCHER – The 58th annual Eastern Arizona College Boys Holiday Basketball Tournament is almost to a close and local rivals No. 1 Thatcher and No. 2 Pima will battle for the championship Wednesday night, starting at 8 p.m.

The four-day boys and girls tournament concludes Wednesday night at Guitteau Gymnasium, which will have seen 48 games played in those four days.

Championship Game – No. 1 Thatcher versus No. 2 Pima

Thatcher got to the championship game by defeating No. 8 Fort Thomas 95-33 in the first round and No. 4 Saint David 54-26 in the semifinals.

In the game against Saint David, Thatcher was led by Hudson Griffin with 14 points; followed by Brandon Napier with 12; Bradley Curtis with 11, T.J. Reed, Cody Jones, and Wyatt Larson all had 4 points each, and Tanner Palmer had 2 points.

Pima got to the championship game by defeating No. 7 Willcox 72-26 in the first round and No. 3 Morenci 64-28 in the semifinals.

In the game against Morenci, Pima was led by Seth Russell with 19 points; followed by Grant Ashby with 13; Garrett Curtis and Wyatt Wiltbank with 8 points each; Coy Miller with 7; Nathan Skiba with 4; Leland Thompson, and Dallin Kartchner with 2 points each, and Riley Alder with 1 point.

The third-place game matches up No. 3 Morenci with No. 4 Saint David and will begin at 2:30 p.m. on Wednesday.

In Morenci’s loss to Pima, Noah Chavez led the team with 9 points; followed by Donnie Vozza with 8; Elijah Leyba, Tristen Sanchez, and Christian Mutengela all had 3 each, and Johnson had 2.

In St. David’s loss to Thatcher, Ryan Gooding led Saint David with 9 points; followed by Kydin Richardson with 6; Jacob Goodman with 4, and Judd with 3.

The fifth-place game will be No. No. 5 Duncan versus No. 6 Safford.

Safford got to the game by defeating Willcox 54-48 in the consolation round. In that game, the Bulldogs were led by Christian Smith with 22 points; followed by Jeremiah Garcia with 9; Estevan Herrera and Nathaniel Quintero both with 8 points each; Jojo Ruelas with 4, and Brayden Bowman with 3.

Duncan got to the game by defeating Fort Thomas 58-41 in the consolation round. In that game, the Wildkats were led by Conlan Jensen with 19 points; followed by Brody Waters with 17; Logan Basteen with 9; Gary Najar with 5, and Benjamin Harris, and Austin Bigler with 4 points each.

The seventh-place game matches up No. 8 Fort Thomas with No. 7 Willcox and starts at 1 p.m. on Wednesday.