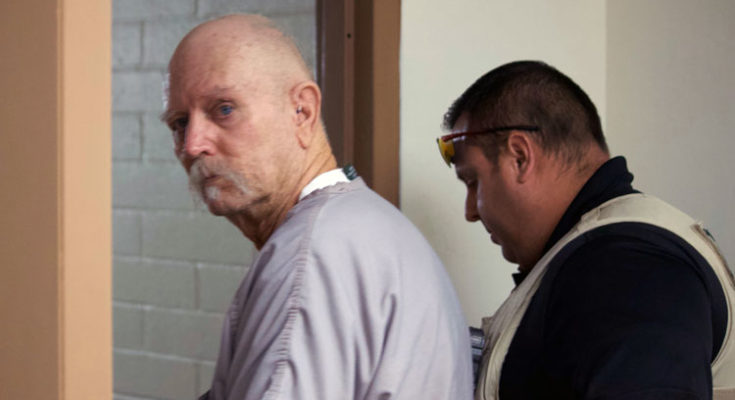 Jon Johnson Photo/Gila Herald: Billy Ray Bishop, 68, is led into the courtroom for his change of plea hearing. Bishop was granted more time to have an outside attorney look at the plea before he signs it. Bishop is one of two alleged online sexual predators caught in a DPS operation.

SAFFORD – The cases against two alleged online sexual predators who were lured to Safford during an Arizona Department of Public Safety Internet Crimes Against Children operation are moving toward resolution, albeit under two new judges.

The story unfolded like a scene from the former television show “To Catch a Predator” as Billy Ray Bishop, 68, of Sierra Vista, and Christopher Decker, 28, of Albuquerque, New Mexico, both traveled in separate, unrelated cases, to Safford under the guise of the opportunity to have sex with 14-year-old girls they had met on social networking and dating application sites. The “girls” were actually detectives corresponding with the men. (See Gila Herald: Online sexual predators lured to Graham County under the guise of ‘hooking up’ with 14-year-old girls – Aug. 14, 2019)

Bishop’s attorney, Dennis McCarthy, advised the court that he had gone over the plea deal with Bishop the previous week but now his client wanted to consult with outside counsel about the plea before he agrees to it.

Graham County Chief Deputy County Attorney L. Scott Bennett did not object to Bishop meeting with outside counsel about the deal but if he didn’t sign what is offered the case would go to trial.

“We’re getting real close to fish or cut bait time,” Bennett said. “He (Bishop) can do my deal when we come back to court but if it’s not signed, locked and loaded and ready to go, then we’re setting it for trial and we’re done.”

Judge Ragland agreed and said he would set a date for the trial and if Bishop signed a plea agreement then they would simply vacate the trial date. Judge Ragland then set Bishop’s trial to run from April 7 – 10 if a plea deal is not signed at a reset change of plea hearing for Jan. 21 at 1:30 p.m. Bishop remains incarcerated on a $250,000 cash-only bond.

Decker is the second suspect in the Internet Crimes Against Children operation and his case is unrelated to Bishop’s other than it was the same type of sting on a different location-based social networking and dating application.

Decker is charged with one count of luring a minor for sexual exploitation – a Class-3 felony.

On Tuesday, Decker appeared in court for a pre-trial conference while his attorney appeared telephonically and requested Judge Peterson recuse himself from the case under the belief that the judge would not accept a pending plea agreement. While Judge Peterson advised that some information in the attorney’s motion for a new judge was not correct, he acquiesced and assigned Gila County Superior Court Judge Pro Tem Gary V. Scales to take over the case.