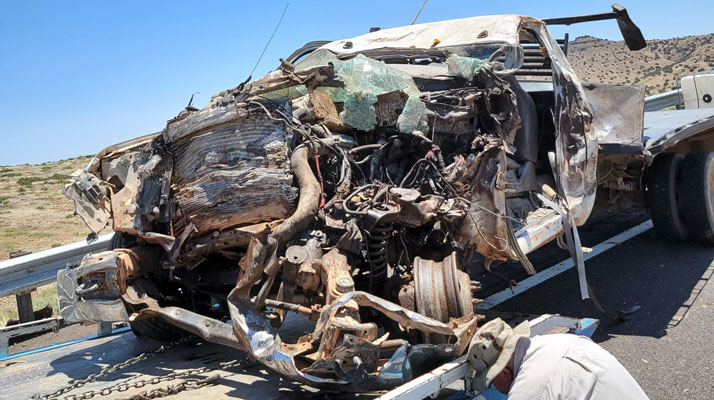 Contributed Photo: The driver of this severely damaged Ford F-550 was flown to a Tucson hospital for treatment after colliding in the Black Hills area of HIghway 191 North on Friday morning.

BLACK HILLS – One man had to be extricated from his truck and then flown to a Tucson hospital for treatment after a collision on U.S. Highway 191 North on Friday morning.

The collision took place at milepost 147 in the Black Hills area.

According to a preliminary report from the Arizona Department of Public Safety, Martin Lucero, 28, of Safford, was southbound at about 10:36 a.m. in a 2007 Ford F-550 that was hauling a utility trailer when he drifted into the oncoming northbound lane and collided head-on with a Ford F-250 that was pulling a toy hauler filled with camping gear.

The collision spewed debris throughout the side of the highway and over the side of the mountain. Lucero was extricated by firefighters at the scene and transported by ground ambulance to Mt. Graham Regional Medical Center. After being evaluated there, he was flown to Banner – University Medical Center Tucson for treatment for a broken leg among his injuries.

The driver of the Ford F-250, Joseph Martinez, 52, of Tucson, was uninjured other than a scratch on his arm, according to the report.

The highway remained open during the cleanup, which took roughly 8 hours. A lot of the debris was all the camping equipment for the northbound driver, who was on his way to Big Lake to camp with a convoy.

The collision is still under investigation, and no citations have been issued at this time.