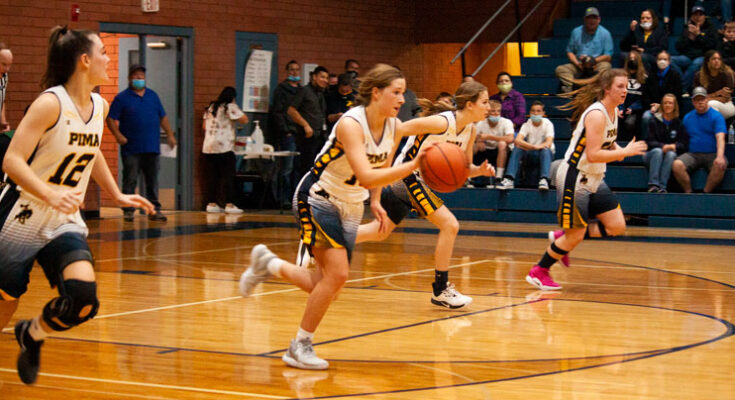 Jon Johnson Photo/Gila Herald: The Pima Roughriders are racing onto the state semifinals after dispatching Phoenix Christian on Saturday, 58-32.

PIMA – The top-ranked Pima girls basketball team took their next step toward their ultimate goal of a state championship on Saturday as they defeated the No. 8 Phoenix Christian Cougars 58-32.

On Saturday, the Roughriders utilized a stifling defense during the third quarter to hold the Cougars to just 4 points while pouring in 24 of their own to put the game out of reach.

“That’s where we pulled away,” said Pima head coach Roy Corona. “I think they realized that we were having a struggle – offensively we were missing layups. So, I kind of got on to them at halftime and they came out and showed what they could do.”

The Roughriders started out hot and had doubled up the Cougars by the time Aubrie Sherwood (13 points) nailed a 3-pointer with 2:46 left in the first quarter to give Pima a 12-6 lead. A bucket by Aubrie’s twin sister, Ashlie Sherwood, and a couple of free throws and a field goal by Nevaeh Grant (8 points) finished off an 8-0 Pima run to push the lead to 17-6 by the end of the first quarter.

Ashlie and Saydee Allred (10 points) then increased the lead to 21-6 early in the second quarter, but Pima then went cold, missing multiple close shots at the rim. Conversely, Phoenix Christian got hot and nailed four 3-pointers to come within 1 point, 21-20.

After Ashlie hit a shot, coach Corona then dialed up some pressure defense with a half-court trap. The trapping defense forced multiple turnovers and gave Pima fast-break opportunities with less than a minute in the quarter. The players made the most as the team finished the quarter with another 8-0 run as Ashlie hit for 6 and Allred got a fast-break bucket to put the Roughriders up 27-20 at the half.

“After we got flustered a little bit we were able to compose ourselves and get back at it,” Grant said. “Going into halftime we were able to show them that we were going to keep the lead and never come down.”

Then came the dominant third quarter. Ashlie was unstoppable in the quarter, hitting 8 of her game-leading 19 points, while center Ashlynn Chlarson scored 6 of her 8 points on the night, scooping up rebounds and hitting close shots as well as mid-range jumpers. Grant poured in 4 and Aubrie added 2 while Allred went 4-5 from the line for the quarter after being mugged all night.

“We started making our shots, running our offense, and playing good, tough defense,” Corona said. “To hold that team to 4 in the quarter, that’s pretty good.”

The fourth quarter was a forgone conclusion after the huge discrepancy of the third quarter, and Pima emptied its bench with just under three minutes to play and Phoenix Christian did the same. The Cougars never stopped battling, however, and actually outscored Pima 8-7 in the final quarter. Aurora Grimwade led the way for the Cougars with 13 points, followed by Nancy Felix and Ainsley Ebert with 7 each, and Kamara Enrietta with 5.

But it was far too little too late, and the Roughriders easily advanced with the 58-32 victory and will now play St. Johns for the third time this season – this time with all the marbles on the table in the state semifinals.

“The semifinals, I’m always happy to be there,” Corona said. “St. Johns; we’ve gotta beat them for the third time. It’s going to be a battle.”

“We’re ready to get to the championship game,” Grant said.

Click here to view a photo album of the game.

In other local girls hoop playoffs:

In 1A, the No. 2 Fort Thomas Apaches defeated No. 3 St. Michael 51-36 to advance to the 1A State Championship. The Apaches will play No. 5 Mogollon, which knocked off top-ranked Leading Edge Academy 52-49.

The game will be played at Dobson High School on Tuesday, March 16, starting at 5 p.m.

In 3A, the No. 4 Thatcher Eagles advanced to the semifinals by defeating No. 5 Valley Christian 45-28 on Friday. The Eagles will travel to Page to battle No. 1 Page on Wednesday, March 17, starting at 7 p.m.