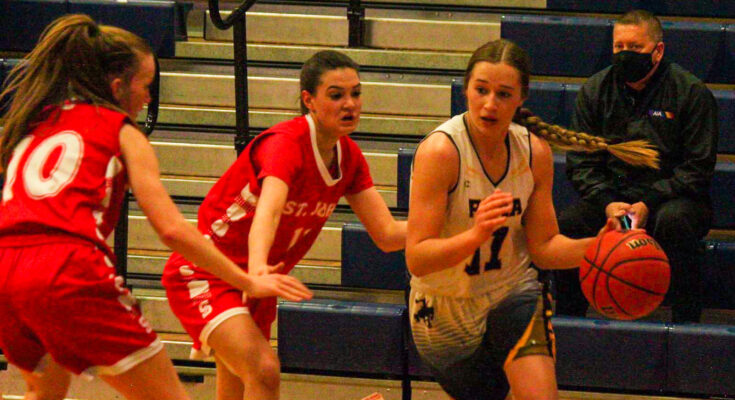 Jon Johnson Photo/Gila Herald: Ashlie Sherwood (11) and the Pima Roughriders drove past St. Johns 43-29 on Friday to move into the 2A Girls State Basketball Championship on Saturday.

Pima will play for the 2A State Championship after dispatching St. Johns 43-29

SCOTTSDALE – Pima fans were on the edge of their seats for the first half of play Friday night in the team’s state semifinal matchup with St. Johns. Right on cue, however, a big third quarter by the Roughriders in which they outscored the Redskins 17-5 paved the way for the victory and a chance at a state championship.

“It was a struggle that first half,” said Pima head coach Roy Corona.

“We struggled offensively the whole game, but defensively we played hard,” he said. “Once again, that’s what got us here.”

No. 1 Pima defeated No. 4 St. Johns 43-29, and will face No. 3 Sedona Red Rock in the championship game at Rancho Solano Preparatory School on Saturday, starting at 5 p.m. Sedona defeated No. 7 Valley Lutheran, 44-32, to earn its spot in the final. Pima’s win marked the third time this season the Roughriders defeated St. Johns, who is a 2A East Region opponent. Pima won the 2A East Region this year by going undefeated in regional play.

St. Johns came out fired up at the start of the game and took a 4-0 lead. The Roughriders looked a bit wound up at the start and had trouble finding the bucket. Pima’s first score of the night came after five-and-a-half minutes of play when Ashlynn Chlarson broke the ice with 2:33 left in the opening stanza. Aubrie Sherwood added a bucket as well and the teams ended the first quarter tied at 4 apiece.

Chlarson ended up leading the Roughriders with 10 points, including a big 3-pointer from deep. She also added 6 rebounds and 2 assists. While she didn’t shoot much, Aubrie was perfect from the field (2-2) and went 5-7 from the charity stripe to finish with 9 points.

In the second quarter, it was the Sam Pippo show as the junior guard scored all of her 8 points in the game in the single quarter. Pippo nailed back-to-back 3’s, hit another field goal and then blocked a St. Johns player.

Even with Pippo’s heroics, however, Pima led just 14-12 as the teams went into halftime.

Then the third quarter happened. As they have done all year, the Roughriders came out a team possessed in the third quarter as their lockdown defense held the Redskins to 5 points in the quarter. Conversely, Pima began to find the bucket more themselves as Saydee Allred (5 points) got on the board and Chlarson scored inside and outside with her 3-pointer to give the Roughriders a 9-point lead. Senior Nevaeh Grant (7 points) then got three the old fashioned way as she was fouled as she drove to the hoop and hit the shot. Grant followed up with the free-throw, and another free throw from Aubrie Sherwood gave Pima a 31-17 lead heading into the final quarter of play.

St. Johns did its best to come back in the fourth and hit for 12 points, but Pima kept the gas on as well and Aubrie and Ashlie Sherwood found the bottom of the net along with shots by Chlarson and Grant. As Aubrie Sherwood lined up for her two final foul shots of the night, coach Corona emptied his bench and the Pima Roughriders stood victorious, 43-29.

“I’m proud of these girls,” Corona said. “We’re in the championship. They worked their tails off this whole year for this point right here where we’re at.”