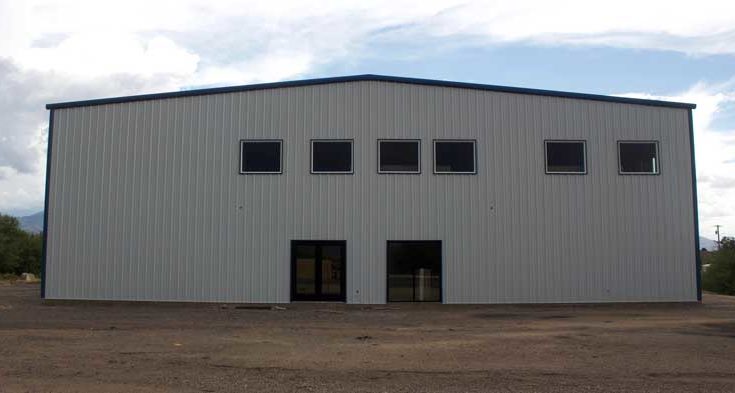 The town will also receive grant loan around the same time

PIMA – The jewel in Pima’s cap as it’s largest, most sophisticated commercial property that will be the new home for Optimal Health Systems (OHS) is on track for an August completion.

The town is also expecting to receive its $325,000 government grant for the project in August. While Pima will have to pay back that grant, another grant from Freeport McMoRan Inc. for $25,000 will not have to be paid back. The two grants should cover the cost of the building, according to Pima Town Manager Sean Lewis.

What started as a gleam of promise in Lewis’ eye back in October 2017, has now almost come to fruition.

Roughly 10 months ago, Lewis, with the support of the Pima Town Council, began the process of purchasing four lots on the old Graco car lot property with the intention of building a metal manufacturing/warehouse building on a 100-foot by 80-foot cement slab. With 8,000 square feet on the first story and an additional 4,000 square feet of office space on the second story, the building should more than meet the needs of its intended tenant. OHS sells nutritional supplements it manufactures on site.

“It’s going to be hard to match Valley-wide,” Lewis said. “We have some other new buildings that are just as nice – Boulevard’s building is beautiful (and) a couple other ones – but when you start talking about these new buildings and the different electronics with Cat-5 and Cat-6 wirings for computers and everything, it’s top of the line. It’s going to be really nice.”

While the plan is to recoup the town’s expense on the project through a 10-year lease with OHS, Lewis said OHS owner Doug Grant has approached him with the thought of purchasing the building from the town outright. Lewis said either option is acceptable to him, and if Grant is able to secure funding to purchase the building Lewis said he would, in turn, take the proceeds from the sale and upgrade another commercial area with a different suitor. Lewis said he has been approached by other businesses looking to move to Pima if they had facilities tailored to their needs as well.

When asked by Councilor Jesus “Chuy” Cabrera if the town would get what it put into it if it was sold instead of leasing it for 10 years Lewis advised, “We’ll do very well.”

“If we get it sold, we can flip right around and do this again because our main objective here is stimulating our economy.”

Lewis told the Gila Herald that while he would be fine with leasing the building as originally planned he is also excited about the possibility of selling the building so he could immediately start another project instead of having to wait three or four years to do so.

“If they come through with the money that we’re going to be asking for it then great,” Lewis said.

“If something comes up and he has the ability to purchase it then we’ll look at that but right now it’s a long-term lease.”