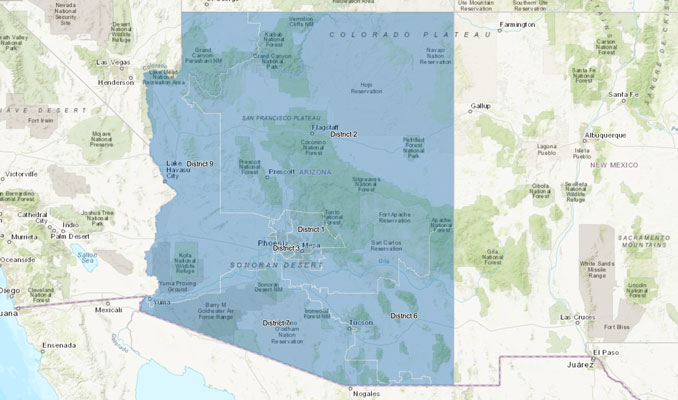 PHOENIX – The Arizona Independent Redistricting Committee did what the voters in Graham and Greenlee counties couldn’t; remove incumbent Tom O’Halleran (D-CD-1)as its representative in Congress.

That’s because O’Halleran no longer lives in the same district.

Most of Graham County and all of Greenlee County will now be in Congressional District 6.

The new district encompasses all of Greenlee County and all of the non-reservation lands in Graham County, and most of Cochise County except for Bisbee and some surrounding areas. The boundary then brushes up against Green Valley and Sahuarita in Pima County and then encompasses Davis Monthan Air Force Base to the north. The district takes in Catalina Foothills, Casas Adobes, Oro Valley, and Marana, as well as Eloy and parts of Casa Grande.

With O’Halleran in another district and Rep. Ann Kirkpatrick (who previously served as Graham County’s representative) having already announced her decision to not run for another term, the district will be wide open and is considered a toss-up seat for either Republican or Democrat candidates.

O’Halleran himself is planning on staying in Congress in District 2. On Thursday, he released the following statement.

“I know by now most of you have seen our new map; I’ve seen it too. I’ve talked with our staff, our hardworking volunteers, and, most importantly, my family. We know this race will be tough, but I’ve never been one to back away from a tough race before, and I don’t intend to now. This election will require a lot of doors knocked, many phone calls made, and all-encompassing voter turnout from Arizonans across our beautiful state.”

“But let me be clear: I want to continue to represent you and your family. I want to build upon the bipartisan work of my office to lower the costs of health care and prescription drugs, to honor our veterans, invest in our infrastructure, protect the sovereignty of tribal communities, and to stand up to attacks on our very democracy.”

“Even though our district is changing, the heart of rural Arizona remains intact in AZ-02. The families that live in our district are unique in their backgrounds, their careers, their creeds, and their political beliefs, but they are united by the maverick spirit of our wild, western lands.”

“To families who’ve been moved into other districts after 2022, make no mistake: you won’t be left behind this coming year. My staff and I are dedicated to serving every First District family that needs assistance. My offices, in Washington and in Arizona, are open to you.”

On the state level, the newly formed Legislative District 19 is nearly the same as the previous LD 14 that Graham and Greenlee counties were in before, with the exception of the exclusion of northern Greenlee County and parts of southwestern Cochise County, including Bisbee.