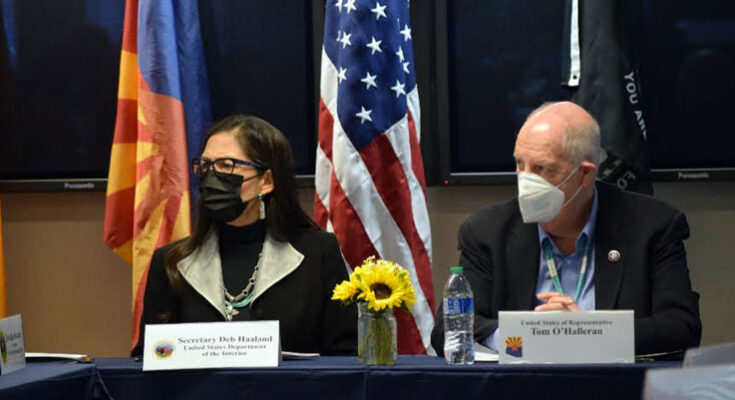 Contributed Photo: Pictured are, from left, Secretary of the Interior Deb Haaland and Congressman Tom O’Halleran (AZ-01) during a recent visit to the Gila River Indian Community.

CHANDLER – On Tuesday, following a visit from Secretary of the Interior Deb Haaland to the Gila River Indian Community, Congressman Tom O’Halleran (AZ-01) announced that more than $210 million in funding secured via the O’Halleran-backed bipartisan infrastructure law had been awarded by the Department of the Interior to fulfill settlements of Indian water rights claims in Arizona’s First Congressional District.

During her two-day visit, O’Halleran accompanied Secretary Haaland at the Inter-Tribal Council of Arizona’s listening session, her visit to the Gila River Indian Community, and a drought roundtable.

“Clean, reliable, running water supports our communities and is necessary for their health, safety, and economic growth. However, for far too many families on tribal lands, this vital resource is either wholly unavailable, or difficult, tedious, and often unreliable to access” said O’Halleran. “As an advocate for tribal water rights since I came to Congress in 2017, I am thrilled to see our bipartisan bill working to honor the federal government’s trust responsibility to tribal nations and deliver this much-needed funding to tribes in Arizona’s First District. These water settlements will help offer surety to our growing state’s water supply, address water issues at areas like Lake Mead, and build a better future for all of Arizona. I thank Secretary Haaland for her visit, and I look forward to continuing to work together to ensure tribes have the resources they need.”

Funding allocations announced today were made possible under the O’Halleran-backed Infrastructure Investment and Jobs Act, signed into law in November 2021, which includes $2.5 billion in federal funding to implement the Indian Water Rights Settlement Completion Fund, and a total of over $13 billion to invest directly in tribal communities throughout the country.

“Water is a sacred resource, and water rights are crucial to ensuring the health, safety and empowerment of Tribal communities. Thanks to congressional leaders, like Rep. Tom O’Halleran, the Bipartisan Infrastructure Law will allow the Interior Department to uphold our trust responsibilities and ensure that Tribal communities receive the water resources they have long been promised,” said Secretary Haaland. “I am grateful that Tribes, some of whom have been waiting for this funding for decades, are finally getting the resources they are owed.”

Allocated funding also includes $205,425,000 to fulfill the Navajo-Utah Water Rights Settlement Act, legislation cosponsored by O’Halleran in the 116th Congress, and included in the Consolidated Appropriations Act of 2021.

“The Gila River Indian Community commends Congressman O’Halleran for his strong partnership with the Community and tribes in Arizona to support water conservation efforts and address the mega-drought in the state,” said Gila River Indian Community Governor Stephen Roe Lewis. “Congressman O’Halleran’s commitment to inclusion of water infrastructure funding in the Bipartisan Infrastructure Law has provided a significant amount of funding to address the water infrastructure needs for tribes and the state at this critical time.”