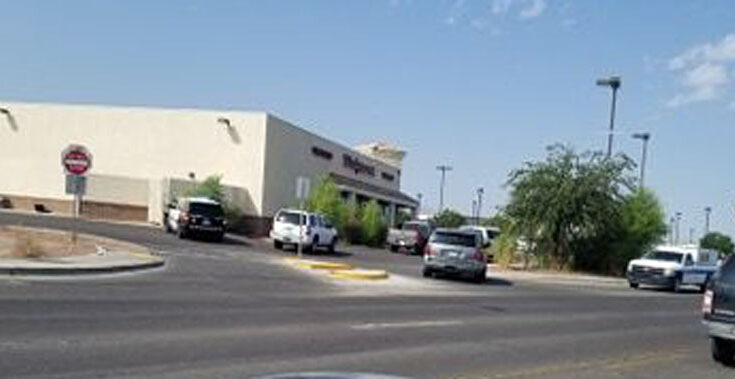 Contributed Photo/Courtesy Joseph Ratliff: Officers surrounded Walgreens on Monday morning to secure the area after an alleged shoplifter claimed to have a gun and would not follow officers’ commands.

SAFFORD – Officers surrounded the Walgreens store in Safford on Monday morning in response to an alleged shoplifter who wouldn’t surrender and claimed to be armed.

Police officers utilized a TASER to subdue the woman who was allegedly shoplifting from Walmart at 755 S. 20th Ave.

The woman was located by a Thatcher officer outside the entrance of Walgreens at 1995 W. Thatcher Blvd. around 10 a.m. and told the officer that she was armed with a gun, according to a Safford Police media release.

The woman allegedly refused to remove her hand from her purse or listen to commands. She also refused to leave the front entrance of Walgreens, potentially endangering employees and customers.

Multiple officers arrived as backup and surrounded Walgreens to secure the area.

An officer then utilized a TASER to subdue the subject, who fell to the ground and was taken into custody without further incident.

The name of the subject was not immediately released.