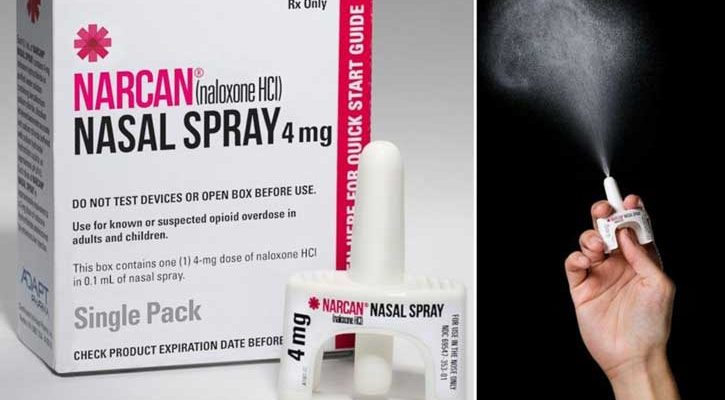 Narcan nasal spray was developed for use by first responders, and friends and family members of those with opiate addiction to counteract the effect and save lives from deadly overdoses.

SAFFORD – When one envisions a police officer, they might see someone who writes a speeding ticket or other moving violation. Or, they might see a protector fighting against those who would hurt others. Or they could fear them out of worry of prosecution.

The fact is that officers are, especially in this day and age, the first contact by people for a variety of reasons or issues, and officers indeed must wear a variety of hats. Whether they be grief counselors, mental health advocates, family dispute settlers, or simply cops chasing crooks and thieves, officers are trained to assist in an extreme variety of ways – including healthcare as well.

On Nov. 17, Safford officers showed their range by assisting an opioid overdose victim.

The officers were dispatched at about 4:09 a.m. to the area of the Sunrise Village & RV Resort off Hollywood Road regarding an Oxycontin overdose. Oxycontin is a prescription opioid that is similar to heroin but uses a time-release when taken correctly.

Upon arrival, officers located a male who was not having success in rousing a female victim who was unconscious on a bed with shallow breathing. An officer administered a dose of Narcan (naloxone), an opioid antagonist, to help counter the effects of Oxycontin. According to the National Institute on Drug Abuse, naloxone reverses and blocks the effects of opioids and can quickly restore normal breathing to a person if their breathing has slowed or stopped because of an opioid overdose. Opioid examples include fentanyl, heroin, oxycodone, hydrocodone, codeine, and morphine.

Police officers and first responders carry naloxone for emergency use and organizations like the Graham County Substance Abuse Coalition advise those who use opiates and family members to keep Narcan on hand in case an emergency arises when it is needed to save someone’s life. Naloxone (Narcan) is available without a prescription from any local pharmacy and comes in both a nasal spray form or an injectable form which can be injected into a muscle, under the skin, or into the veins.

After the victim still didn’t come out of their nod after the Narcan dose, an officer removed her from the bed onto the floor and began to perform cardiopulmonary resuscitation (CPR). After a while, the officer said he could feel a heartbeat and shortly after that the victim opened her eyes.

She then fell back asleep, but the officer performed a “sternum rub” to bring her back to consciousness.

Since Lifeline Ambulance only had two ambulances on duty for the county and they were both busy and unable to respond, the officer then helped the victim into his patrol vehicle and transported her to the Mt. Graham Regional Medical Center, where she received additional treatment.