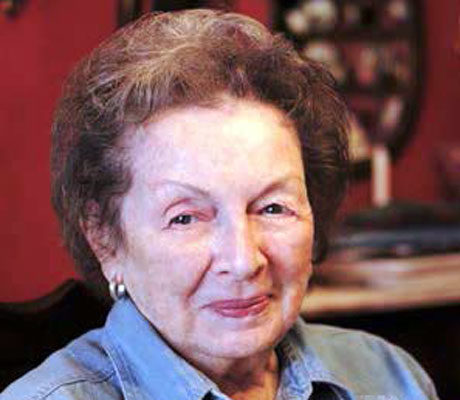 June Lorraine (Potter) Palmer was born in Clifton on Dec. 7, 1922, to Lloyd Vernon Potter and Kittie Cosper Potter. Her sister Barbara Mae Potter was born in Clifton on Feb. 24, 1931. June’s maternal grandparents were J.H.T. “Toles” Cosper and Louella Flanagan Cosper. Her paternal grandparents were Delbert Maxwell Potter and Elizabeth Dorsey Potter. June’s Grandfather Potter homesteaded on the San Francisco River north of Clifton, building Potter’s Ranch where June was born. June returned to Potter’ Ranch in 1989 and lived out her last 30 years there.

June attended Clifton schools and the University of Arizona, majoring in Business Administration. June was active in high school, a member of many clubs, active in arts and sports, and winning gold medals as State Champion in doubles tennis two years in a row with her partner and cousin Helen Smith.

June was a member of the Presbyterian Church growing up and converted to Episcopalian when she married. She served on the Guild and in other capacities. She worked on the “Feed the Hungry” program and her hobbies included music and interior decorating.

While attending the University of Arizona, June met John Curtis Orthel, of Prescott, and married during her Junior year on March 13, 1943. Johnny served the Air Force for several years, then entered private employment as an electrical engineer working Northwest Airlines and Honeywell. Johnny’s employment required the family to move to several different SAC locations around the world. June’s two children were born in Minneapolis, Minnesota.

In San Diego, June was a secretary for Claremont College, where she also taught art therapy and learned computer word processing. Later, she worked for the San Diego Community College District, the County of San Diego-Juvenile Court, Board of Supervisors and Public Administrator and lastly taught classes for the SDCCD.

June married James W. Palmer of El Cajon, Calif. in August of 1984. They lived in Jim’s home until June purchased Potter’ Ranch in 1989. Jim and June divorced but remained friends until his death a few years later.

June recalled that she “spent some wonderful childhood days on the Potter Ranch. We spent summers there and lived in Clifton during the school year.  I also remember trips to the Blue, the Y Bar Y Ranch, where Mother was raised. My children have given me many moments of pride as well as much satisfaction in their achievements. Life is precious”.

June went to be with the Lord on Jan. 18. She is survived by her son, John; grandson, Klee; and a great-granddaughter. She was predeceased by both husbands, her daughter Janice, and her granddaughter Jennifer.

Funeral services are scheduled for Tuesday, Feb. 12, at her childhood church, the Shepherd of the Hills Community Church in Morenci at 11 a.m.  Interment will follow in the Clifton Cemetery in Wards Canyon.  The ladies of the church will be providing a meal at the Church after returning from the Cemetery.

Arrangements are under the direction of McDougal’s Caldwell Funeral Chapel & Gila Valley Crematory. Online condolences may be extended at www.caldwellfunerlchapel.com.