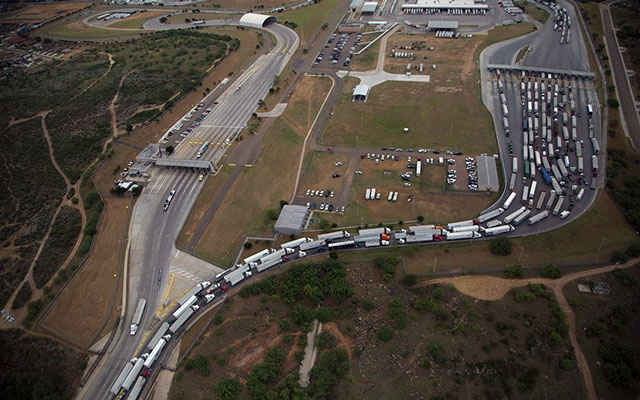 Photo By Donna Burton/U.S. Customs and Border Protection: Trucks line up to get into the U.S. from Mexico at the World Trade Crossing International Bridge in Laredo, Texas, in this 2017 photo. A clamp-down on trucks by Texas officials last week led to extensive delays that have pushed traffic west to Nogales, driving up wait times there, officials said.

NOGALES – Commercial truckers were coping with longer-than-normal delays at the Nogales border crossing Thursday, as trucks trying to escape a logjam at the Texas border headed west to Arizona instead.

And border and industry officials worried that the problem might get worse unless Texas Gov. Greg Abbott backs off a recently imposed truck inspection program, an “inspection regime” that one expert said has slowed trade almost to a halt at some ports. In response to Abbott’s order, some Mexican truckers have blocked Texas ports of entry as a protest.

In the meantime, “Millions and millions of dollars are being lost every day, over $100 million in fresh produce already,” because of delays in Texas, said Lance Jungmeyer, president of the Fresh Produce Association of the Americas.

“We’re seeing kind of an increase in crossings in-field activity in Nogales,” Jungmeyer said. “Because since last Friday, that’s been the only major port of entry to get fresh produce across.”

At 11 a.m. on a typical Thursday, commercial truckers can expect a 39-minute delay to get through the Mariposa Port of Entry in Nogales. But trucks were waiting as long as 75 minutes at 11 a.m. this Thursday, according to data from U.S. Customs and Border Protection.

The backups began April 6 when Abbott ordered the Texas Department of Public Safety to conduct “enhanced safety inspections” of all vehicles after they come through the state’s international ports. He said the inspections are needed to protect Texans from “unsafe vehicles and their unsafe drivers” coming from Mexico.

Even though it was laced with references to cartels, trafficking, and the planned end of Title 42 – the health regulation that has allowed border officials to turn away asylum seekers since March 2020 – Abbott’s order officially targets only the roadworthiness of the trucks themselves.

The order was derided Wednesday by White House spokeswoman Jen Psaki as “another political stunt” that is “impacting people’s jobs and the livelihoods of hardworking families in Texas and across the country.” She said in a statement that the “redundant” inspections have caused “significant disruptions to the food and automobile supply chains, delaying manufacturing, impacting jobs, and raising prices.”

That criticism was echoed by industry officials, the CBP, and even members of Abbott’s own party in Texas. In a statement Tuesday, CBP officials called the order “unnecessary” and a costly measure that will impact consumers and businesses nationwide.

Trade slowed tremendously at Texas ports as a result, while it was stopped entirely at the Hidalgo/Pharr border entry by protesting Mexican truckers who blocked the port.

To avoid the extensive delays, and the Texas DPS inspection of trucks, some truckers are willing to drive as much as 20 hours to reach the border at Nogales. They started showing up Thursday, said Arizona Department of Agriculture spokesperson Robert Smook, who added that Mariposa is expecting more in the coming days.

The Mariposa Port of Entry is the main port of entry for fresh produce from Mexico and is also the primary produce distribution point on the southern border, according to the General Services Administration.

Jungmeyer said the port’s ability to quickly process imports is vital to Arizona’s economy, but that there is such a thing as too much traffic for the port. An unexpected increase in commercial traffic through Mariposa could “strain the resources” in Arizona, eventually slowing the supply chain and raising prices for consumers.

Officials said they hope that recent agreements between Abbott and the governors of two of the four Mexican states bordering Texas – Nuevo León and Chihuahua – will start to ease the backlog.

Texas ended secondary inspections at the Laredo–Colombia Solidarity International Bridge on Wednesday after Nuevo León officials agreed to conduct “enhanced border security enforcement measures” on their side of the border. A similar deal Thursday with the government of Chihuahua ended Texas inspections at the Del Rio-Ciudad Acuña border crossing.

Under the agreement, Texas officials will return to conducting random searches rather than screening every truck crossing at those ports.

But those are just two of more than a dozen commercial land ports of entry in Texas. Officials with the Texas Department of Agriculture – whose commissioner this week called Abbott’s order “a clog in the drain” of commerce for the state – said Abbott needs to do more to fix the problem they say he created.

“This didn’t wind up all at once,” said Reb Wayne, communications director for the department. “It’s not going to unwind just immediately, it’s going to take some time.”