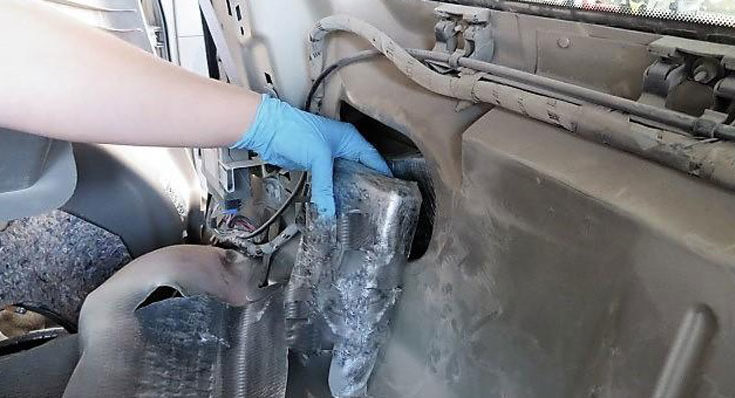 NOGALES – U.S. Customs and Border Protection officers at Arizona’s Port of Nogales arrested a Mexican national and a U.S. citizen connected with separate failed attempts to smuggle a combination of cocaine, heroin, and methamphetamine into the United States on Wednesday.

CBP officers at the Mariposa Crossing referred a 50-year-old Nogales, Sonora, Mexico, man for further inspection of his Ford SUV on Wednesday afternoon. A CBP narcotics detection canine alerted to a scent it was trained to detect within the vehicle’s rear quarter panel. Officers removed several packages of drugs, which were identified as almost 16 pounds of cocaine, worth more than $381,000.

Late Wednesday evening, officers at the Dennis DeConcini Crossing referred a 40-year-old Mesa, Arizona resident for an additional search of his Mazda sedan. After a positive alert by a CBP canine, officers removed multiple packages of hard drugs from throughout the vehicle. The drugs were identified as nearly 11 pounds of heroin, valued at almost $296,000, and more than 45 pounds of meth, with an estimated value of more than $135,000.

Officers seized the drugs as well as both vehicles. The subjects were arrested and then turned over to U.S. Immigration and Customs Enforcement’s Homeland Security Investigations.