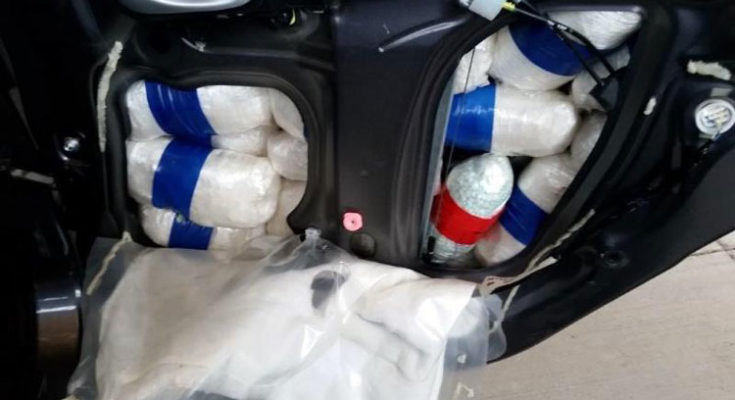 Contributed Photo/Courtesy U.S. Customs and Border Protection: Officers removed heroin, fentanyl, and meth from a throughout a smuggling vehicle, including 121 pounds of heroin worth nearly $3.26 million.

NOGALES – U.S. Customs and Border Protection, Office of Field Operations, officers at the Port of Nogales seized more than 314 pounds of methamphetamine, heroin, cocaine, and fentanyl over this past weekend. Four U.S. citizens and a Mexican national are in custody for their connection to the drug seizures.

Officers at the Mariposa Crossing referred a 19-year-old Tucson man for further inspection of his Jeep SUV as he attempted to enter the U.S. from Mexico on Friday afternoon. After a CBP narcotics detection canine alerted to the presence of a scent it was trained to detect, officers removed more than 90 packages from the trunk. The packages of methamphetamine weighed almost 107 pounds, worth nearly $320,000. A search of the man revealed a small bag of personal-use cocaine that was hidden inside of his shoe.

A short time later, officers at the Morley Pedestrian Crossing referred a 60-year-old Tucson woman and her 40-year-old daughter for an additional search as they attempted to enter the U.S. from Mexico. A search of the daughter led to the discovery of two packages of drugs concealed around her upper torso. A subsequent search of the mother revealed five packages of drugs around her waist. The drugs around the mother were determined to be more than four pounds of fentanyl, which is worth nearly $50,000. The drugs being carried by the daughter were determined to be more than two pounds of meth, worth $7,000 as well as a small amount of heroin, worth more than $1,500.

Saturday morning, officers at the Mariposa Crossing referred a 31-year-old Mexican woman for further inspection of her Toyota sedan, when she attempted to enter the U.S. from Mexico. A canine alert led officers to the discovery of a combined load of hard drugs inside of the fuel tank. More than 11 pounds of heroin, worth nearly $305,000 and a minimal amount of fentanyl were seized.

Later that afternoon, officers at the Mariposa Crossing selected a 56-year-old Mesa woman for a further search of her Honda sedan as she attempted to re-enter the U.S. from Mexico. A cursory search of the vehicle led to the discovery of a combination of fentanyl, heroin, and meth throughout the vehicle. The drugs were identified as almost 121 pounds of heroin, worth nearly $3.26 million. Nearly 65 pounds of meth and just more than five pounds of fentanyl were also removed. The meth has an estimated value of nearly $194,000, while the fentanyl was valued at $69,000.

Officers seized the drugs and vehicles. The subjects were arrested and then turned over to U.S. Immigration and Customs Enforcement’s Homeland Security Investigations.