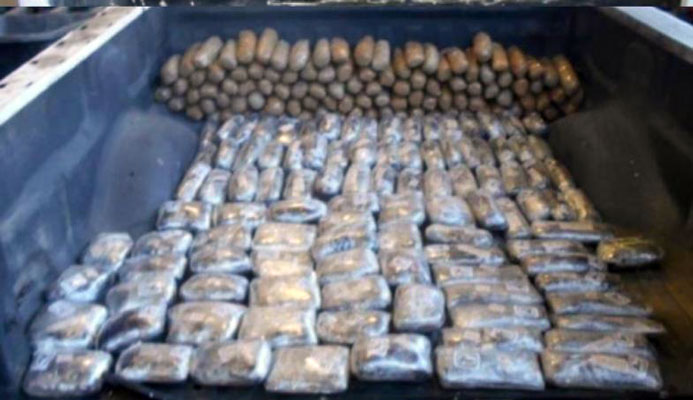 NOGALES – U.S. Customs and Border Protection (CBP) Officers at the Port of Nogales seized 260 pounds of hard narcotics with an estimated street value of more than $1.4 million.

Thursday afternoon, a 34-year-old U.S. citizen attempted to make entry into the United States through the Port of Nogales in her pickup truck.  She was referred for further inspection. While in secondary, CBP officers conducted a thorough vehicle inspection and noticed anomalies throughout.

After an alert by a CBP narcotics detection canine to a scent it is trained to detect and confirmation of anomalies through a non-intrusive inspection, officers discovered a total of 209 packages concealed throughout the cab, truck bed, tailgate and spare tire.  The drugs were determined to be 51 pounds of fentanyl tablets (over 211,000 tablets), 91 pounds of heroin, 113 pounds of methamphetamine and nearly six pounds of cocaine.

Area Port Director Michael Humphries stated, “Day in and day out, CBP Officers continue to protect our nation’s borders and communities. Yesterday, cocaine, heroin, methamphetamine, and over 211,000 fentanyl tablets were stopped at the border by CBP Officers from reaching our neighborhoods throughout the United States.  This is another excellent example of our officers working together as a team to achieve this great enforcement action to prevent these deadly drugs from reaching neighborhoods. Our officers remain dedicated to protecting the borders in the midst of this pandemic.”

The drugs were seized and the woman was arrested and then turned over for federal prosecution.