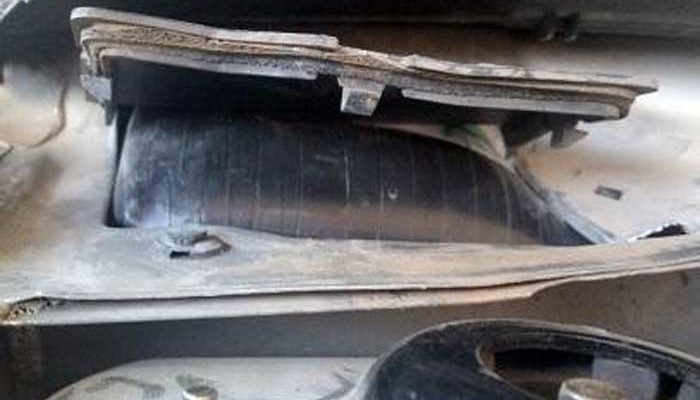 Contributed Photo/Courtesy Border Patrol: A CBP canine led officers to the firewall of a smuggling vehicle, where they found 21 pounds of cocaine. The seizure was one of two over the weekend, which nearly eclipsed the largest hard drug seizure for the organization on record in Arizona.

Officers at the DeConcini Crossing referred a 38-year-old male for further inspection of his Saturn sedan Friday afternoon. Following a positive alert from a CBP canine, officers seized more than 21 pounds of cocaine from the vehicle’s firewall, worth an estimated $239,200.

On Saturday, CBP officers at the Mariposa Commercial Facility referred a 65-year-old man for further inspection of the tractor-trailer he was driving into the United States from Mexico. A CBP narcotics detection canine alerted to an odor it was trained to detect, leading to the discovery of more than 364 pounds of meth, worth almost $1,092,300; six pounds of heroin, worth more than $100,000; almost seven pounds of fentanyl, worth more than $95,000; and 6,000 suspected Oxycodone pills, with a value of nearly $113,000. All values are wholesale values at the border and street values increase substantially once the drugs are moved to the United States.

The second seizure is the third largest seizure of its kind by a CBP port of entry in Arizona.

Officers seized the drugs and both vehicles, trailer, and commodity. Both subjects were arrested and then turned over to Homeland Security Investigations.