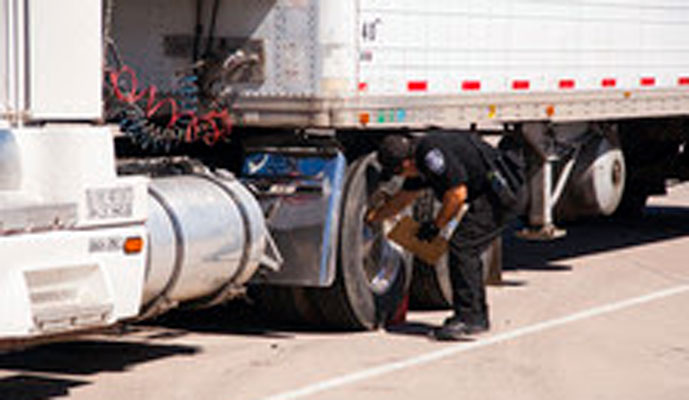 Contributed File Photo/Courtesy ADOT: Commercial trucks will be limited to the right lane only on a 20-miles two-lane stretch of I-10 between Phoenix and Casa Grande.

PHOENIX – To promote safety on a 20-mile segment of Interstate 10 between Phoenix and Casa Grande, the Arizona Department of Transportation in collaboration with the Department of Public Safety is installing new signage that will restrict heavy vehicle truck traffic on this busy section of highway. Truck traffic will be restricted to the right lane only.

The signs are an interim safety measure along the final two-lane stretch of I-10 between Phoenix and Tucson that has yet to be widened to three lanes in each direction.

This segment has safety concerns due to heavy traffic flow and truck traffic. The right-lane restriction for heavy vehicle truck traffic is intended to help reduce crashes, along with the resulting delays and closures due to these incidents.

Based on data for the area where the signs are being posted, heavy vehicles were involved in about 20 percent of crashes and 15 percent of rear-end and sideswipe crashes.

The signs are intended to be in place until an improvement project kicks off to widen this segment of I-10. The first step is expected in 2023 with the replacement of bridges that carry traffic over the Gila River, following the required environmental review and clearance. Also, ADOT is working closely with the Gila River Indian Community and the Maricopa Association of Governments to secure federal funding, in addition to committed state funding, for work that could be completed as early as 2026.

The signs restricting heavy vehicle truck traffic to the right lane only are similar to those that ADOT has employed elsewhere, including I-17 north of Black Canyon City. Sign installation began Monday and is expected to continue through this week.

ADOT has worked to coordinate the interim safety measure with the Arizona Department of Public Safety and the Arizona Trucking Association. As is the case with other traffic control measures, ADOT will closely monitor traffic operations now that the signs and right-lane restrictions are in place.

For more information about plans to widen I-10 between Phoenix and Casa Grande, please visit http://i10wildhorsepasscorridor.com/.