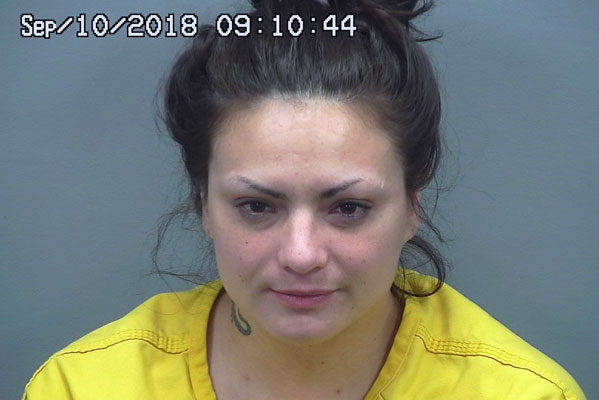 Contributed Photo/Courtesy GCSO: Ashley Munoz, 29, was booked into the jail on charges of DUI and disorderly conduct/domestic violence.

SAFFORD – An intoxicated woman was arrested for DUI and disorderly conduct/domestic violence after driving behind a pedestrian down the wrong way on the U.S. Highway 70 one-way merge lane from 8th Avenue.

Ashley Munoz, 29, of Hurley, N.M., was booked into the Graham County Adult Detention Facility on Sept. 10.

According to a Safford Police report, an officer was westbound on U.S. Highway 70 at about 12:16 a.m. when he noticed a dark-colored Nissan sedan driving behind a pedestrian going down the wrong way in the merge lane. The driver, Munoz, was yelling at the male pedestrian, later identified as Munoz’s ex-husband, Eugene Alcorta.

When Alcorta saw the police vehicle, he rapidly walked eastbound across 8th Avenue into the Mechy’s parking lot at 702 W. Thatcher Blvd. The vehicle that was following him went south and then made a left turn into the parking lot as well.

When questioned why she was following Alcorta, Munoz said she was a “stalker (expletives deleted) and denied drinking anything other than a milkshake.

Alcorta later advised the woman was his ex-wife but that they were going to get remarried. He said she was upset with him for talking to other women at the Bull Pen bar.

The officer assisted Alcorta with arranging for a sober driver to pick him and his car up and he was released.

During her interaction with police, Munoz was belligerent and cursed with slurred speech. She also allegedly threatened Alcorta to not say anything to the officers or that she would do him bodily harm.

Munoz, who was previously arrested for resisting arrest and aggravated assault on a police officer, restrained being taken into custody.

While at the Safford Police Department, she continued to yell profanities at the officers in both English and Spanish and said she couldn’t be detained in such a fashion because she was a woman. She then threatened to begin her menstrual flow as well as defecate everywhere in the processing room. She then began to make grunting noises as if to indicate she was attempting to have a bowel movement, according to the officer’s report.

A warrant was served to take Munoz’s blood for DUI testing but she still refused and had to be physically restrained so the officer could gather his sample.

Due to her intoxication, she was then taken to Mt. Graham Regional Medical Center. After being medically cleared, she was transported to the jail and booked on her above-listed charges.