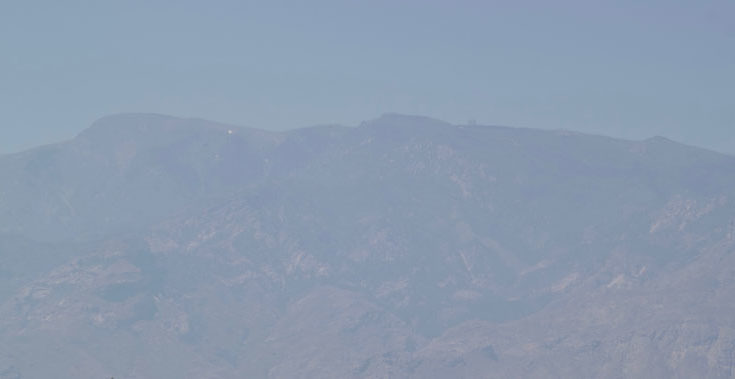 Jon Johnson Photo/Gila Herald: Several wildfires may be contributing to the hazy conditions in the Gila Valley.

GILA VALLEY – Multiple fires, including the Bringham Fire north of Morenci, are possibly contributing to the hazy conditions in the Gila Valley. While the conditions are hazy, they do not seem to pose any immediate respiratory threat at this time.

The Bringham Fire is lightning-caused and is burning in the Apache-Sitgreaves National Forest Clifton Ranger District. The fire started Saturday, June 6, roughly 22 miles north of Morenci and has grown to 1,200 acres as of Wednesday, June 10. A Type 3 Incident Management Team led by Matt Bullmore is fighting the fire with roughly 163 total personnel. Planned actions include a potential burnout to hold the fire at U.S. Highway 191.

On Tuesday, the Arizona Department of Transportation closed U.S. Highway 191 north of Morenci and south of Hannagan Meadow between mileposts 186 and 225. Traffic is detoured onto U.S. Highway 180 and State Route 78 through western New Mexico as U.S. Highway 191 in that area is only open to local traffic and no timeframe has been given for the closure.

The Dry Lake Fire is lightning-caused and is burning in the upper elevation area of the San Carlos Apache Reservation in the Natanes Mountain Range north of the Gila Mountain Range. The fire started Saturday, June 6, and as of Wednesday, June 10 has burned 3,400 acres.

The Blue River Fire is lightning-caused and is burning in the upper elevation area of the San Carlos Apache Reservation in Gila County north of Peridot. The fire started Friday, June 5, and has burned 30,000 acres as of Tuesday, June 9. There is 100 personnel assigned to the fire, which is being managed by the Central West Zone Type 3 Incident Management Team.

Additional fires that could contribute to the smoke are the Bighorn Fire near Tucson and the Good Fire and Turkey Fire in the Gila National Forest in New Mexico.