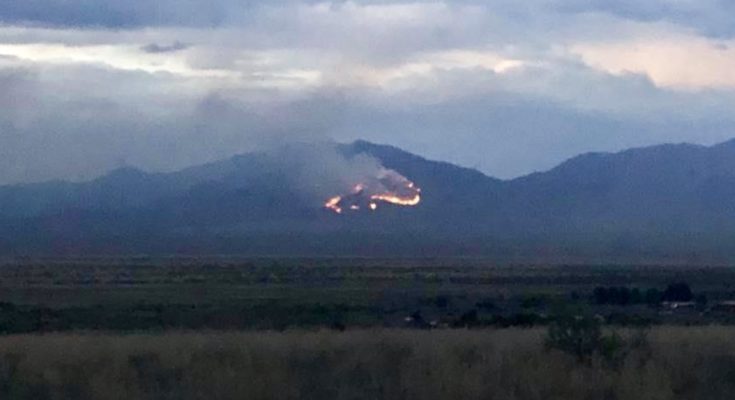 Contributed Photo By Breck McClaine: A lightning-caused wildfire is burning in the West Peak area of Mount Graham. This is a view of the fire from the Bonita area.

MOUNT GRAHAM – A lightning-caused fire erupted in the West Peak area of Mount Graham on Saturday.

The fire had burned approximately 30 acres as of late Saturday night and is in the jurisdiction of the U.S. Forest Service. A Type-3 Incident Management Team has been ordered to combat the fire.

By Sunday, the fire had grown to an estimated 500 acres and was named the Van Valer Fire after the nearby Van Valer Canyon. Air support, including three air tankers, two SEAT airplanes and a helicopter has been sent to help stifle the blaze, which is burning grass and brush. Firefighters are performing a full suppression effort to put out the fire.

The lightning-caused Frye Fire on Mount Graham that began June 7, 2017, burned for more than a month and torched roughly 48,443 acres. That fire burned mostly on the southern and eastern sides but did spread slightly to the western end.

Firefighters managed to spare the mountain’s assets during that fire, including the Mt. Graham International Observatory. However, flood damage from ensuing rains in the burn scar did more damage to places like the cabins at Old Columbine, according to caretaker Daryl Weech. A fire severity map showed most of that fire burned at a low severity.