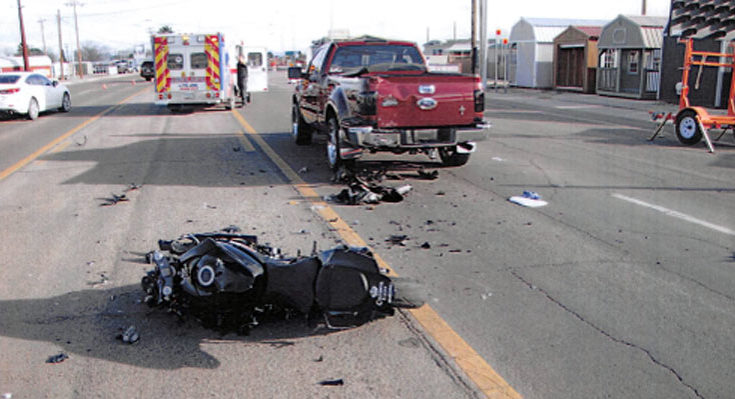 Contributed Photo/Courtesy SPD: A motorcyclist was listed as being at fault for colliding into the rear of a truck that had slowed to allow traffic to merge while eastbound on U.S. Highway 70 on Tuesday.

SAFFORD – The operator of a Suzuki motorcycle was found at fault for colliding into the rear of a Ford truck last Tuesday.

Officers were dispatched to the scene at 704 E. U.S. Highway 70 at about 3:55 p.m. and located the motorcycle and truck both in the eastbound lane closest to the turn lane.

Peter Allen Waller, 36, of Thatcher, was treated at the scene by paramedics with Lifeline Ambulance and was then transported to Mt. Graham Regional Medical Center.

According to the driver of the truck, a white vehicle was attempting to merge into his lane due to the far right lane being closed ahead and that he slowed down to allow the merge. The truck driver said he had to slow down significantly because the white vehicle was taking a long time to merge and when he did so the motorcycle struck him in the rear of his truck. The driver of the truck was not injured.

Officers located numerous witnesses who corroborated the truck driver’s version of events and noted that there was a single four-foot long skid mark behind the truck that appeared to be caused by the motorcycle.

After the motorcycle was towed from the scene and the roadway was cleared, the officer responded to MGRMC and spoke with Waller, who advised he didn’t remember anything prior to the collision.

The officer informed Waller that due to the evidence at the scene and statements from witnesses he would be found at fault for the collision. The officer then issued Waller citations for failure to control his vehicle and for not having any insurance on the motorcycle. On Thursday, Feb. 7, an official complaint was filed in Gila Valley Consolidated Court charging Waller with citations of speeding greater than reasonable and prudent and failing to produce evidence of financial responsibility.

According to Waller’s family, he was later transferred to a Tucson hospital for continued treatment of his injuries.