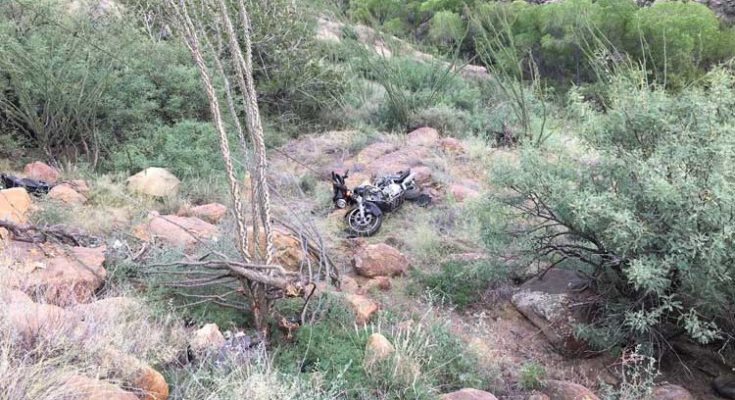 Contributed Photo/Courtesy DPS: A black, 2017 Harley Davidson motorcycle rests at the bottom of a rocky embankment. Its rider, Raymond L. Perry, 61, of Thatcher, was found deceased at the scene.

SWIFT TRAIL – A motorcyclist went off Highway 366 (Swift Trail) on Monday and was fatally injured.

According to an Arizona Department of Public Safety (DPS) press release, Raymond L. Perry, 61, of Thatcher, was riding his black, 2017 Harley Davidson motorcycle over the posted speed limit of 40 mph as he was westbound on Highway 366. Perry failed to negotiate a curve in the road, crossed the eastbound lane of traffic and went off the roadway down a rocky embankment. Perry, who was not wearing a helmet, was pronounced deceased at the scene.

Authorities were dispatched at about 2:12 p.m. to the crash site, which was listed at milepost 119 and is below the Noon Creek Picnic Area.

The DPS was assisted at the scene by the Graham County Sheriff’s Office, Arizona Department of Transportation and Lifeline Ambulance.

A local funeral home responded to assist in the retrieval of the body, and the motorcycle was towed from the scene.