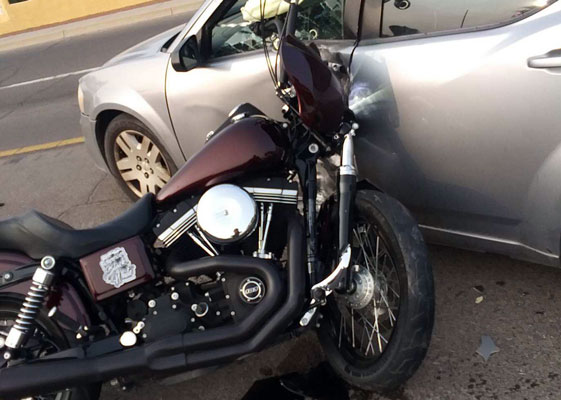 Photo By Gabriel Fernandez/Courtesy Jermaine Romo: A motorcycle is jammed into the front driver’s side door after colliding with the car on U.S. Highway 70. The motorcyclist was flown to a Tucson hospital for treatment.

SAFFORD – The joy and freedom one feels riding a motorcycle down an open stretch of road is hard to beat, but with that happiness comes a trade-off of danger as well.

With all of today’s safety enhancements to cars, motorcycles have generally stayed the same – albeit with some mechanical upgrades, such as brakes. But they still do not normally have seat belts or airbags and the only protection a rider has is what he or she is wearing.

While videos of dangerous motorcycle riders are popular on the Internet, in the Gila Valley crashes are normally caused by other drivers simply not seeing the motorcyclist – which has prompted a “Look out for motorcycles” awareness campaign.

Just such an incident occurred on U.S. Highway 70 on Sunday, Sept. 13, around 4:45 p.m., when a Dodge Avenger driven by Anthony Ward pulled out of the Manor House parking lot.

According to a Safford Police report, Ward advised that he intended to head westbound and was crossing the eastbound lanes when he was struck by a Harley Davidson motorcycle.

The motorcyclist, Jermaine Romo, told the Gila Herald that he was eastbound when the Avenger pulled out in front of him and he was unable to avoid the collision. The motorcycle “T-Boned” the Avenger and the front wheel jammed into the car door. Romo was flown from the bike and broke his left leg and pelvis upon impact with the ground. He was later flown to Banner – University Medical Center for trauma surgery. The Safford Police gave a citation to Ward for failure to yield when exiting a private drive.

Romo has since been discharged from the hospital and is back home to begin five to six months of therapy to recover from his ordeal.