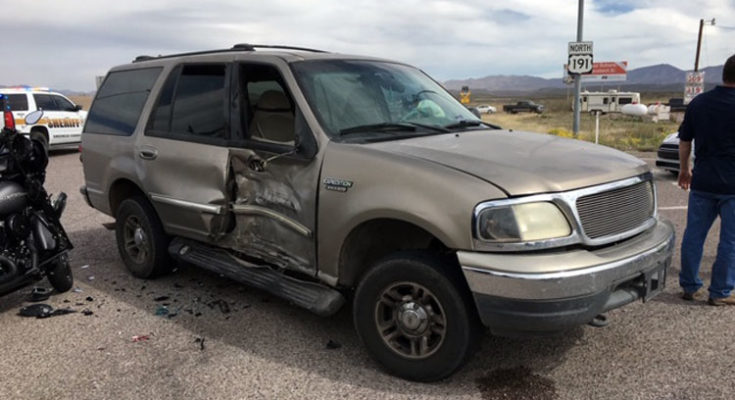 Contributed Photo/Courtesy DPS: This Ford Expedition was T-boned by a motorcycle Friday morning after turning in front of the rider. The motorcyclist was flown to UMC for treatment of his injuries.

THREE WAY – Another serious collision in Greenlee County involving a motorcyclist sent the rider to a Tucson hospital Friday morning.

First responders were dispatched to the scene at about 8:51 a.m. and discovered a collision had occurred between a motorcycle and an SUV.

The motorcyclist, Ricky Len Starkey, 57, of Springtown, Texas, was airlifted from the scene by AirEvac-21 and flown to Banner – University Medical Center Tucson for treatment of a broken right hand and ankle, broken teeth, and an injured vertebrae. Starkey was wearing a helmet at the time of the collision.

According to an Arizona Department of Public Safety report, Starkey was northbound on his gray, 2016 Harley Davidson motorcycle with another rider on a separate motorcycle when a gold, 2001 Ford Expedition driven by Talena Lynn Sherbon, 38, of Clifton, pulled out in front of him. The investigating officer reported Sherbon was southbound on U.S. Highway 191 and attempted to make a left turn onto State Route 78 to turn into a store there. However, she turned directly in front of the motorcycles, which forced the first rider to make an evasive maneuver to avoid a collision. Starkey wasn’t able to avoid the Expedition and T-boned into the front passenger door.

Sherbon and her passenger, Kathryn Cecill Largo, 31, of Clifton, both suffered minor cuts and bruising and were both transported by ambulance to the Gila Health Resources in Morenci for treatment. Family members arrived on scene and removed the Expedition.

Sherbon advised that she never saw the motorcycles and claimed they just came out of nowhere. She was given a citation for performing an unsafe turn.

The intersection was shut down for about an hour to deal with the injured and clean up the vehicles and debris. Waters Towing removed the motorcycle from the roadway.

Greenlee County Sheriff’s Office assisted at the scene along with the Clifton Fire Department.