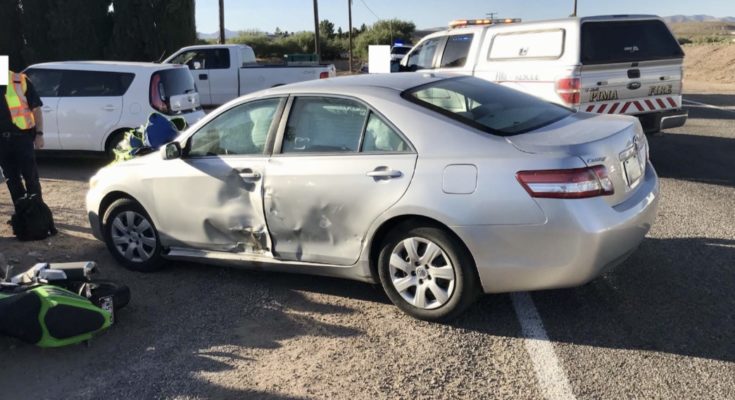 Contributed Photo/Courtesy GCSO: A motorcycle collided with a sedan as the car attempted to make a left turn off Bryce/Eden Road on Tuesday. According to the Sheriff’s Office report, it could not be determined who was at fault for the crash.

GRAHAM COUNTY – A motorcyclist T-boned a passenger car on Tuesday when it attempted to turn off Bryce/Eden Road and into a driveway.

First responders were dispatched to the scene at about 5:53 p.m. and discovered a silver, 2011 Toyota Camry with impact damage to the driver’s side front and rear doors along with a black and green, 2020 Kawasaki EX 400 motorcycle laying on the ground next to it with damage to its front end.

According to a Graham County Sheriff’s Office report, the driver of the Camry, Olivia Crockett Jeffs, said she was northbound on Bryce/Eden Road when she turned on her blinker and attempted to make a left turn into a residence. She said when doing so, the motorcycle attempted to pass and collided with her vehicle. Jeffs and her passenger, Levi Jeffs, were evaluated at the scene and released. Levi corroborated Olivia’s statement and said it appeared the motorcycle was traveling very quickly.

The motorcycle operator, Westley Nash Colvin, was thrown from the bike in the collision. He was wearing a full-face motorcycle helmet that had visible damage.

Colvin was given fentanyl for his pain at the scene but was still able to answer the deputy’s questions and advised that the car failed to signal prior to turning and that he collided with it as he was attempting to pass and it turned left. Colvin was treated at the scene by Pima Rescue and was then taken to Mt. Graham Regional Medical Center for his injuries.

Both drivers were evaluated for DUI impairment at the scene, but due to Colvin’s condition and that he had received fentanyl, verbal consent was given to test his blood for other substances.

Based off the evidence at the scene, lack of scuff marks in the road from the bike and conflicting statements from the driver and the motorcycle operator, the deputy concluded that it could not be determined who was at fault for the collision at this time. 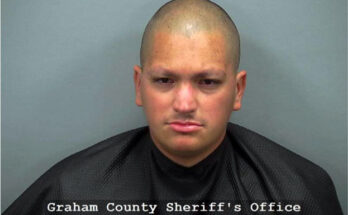