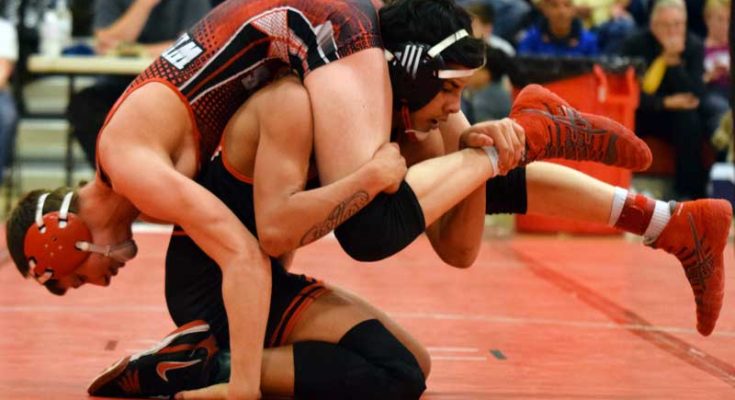 Photo By Raymundo Frasquillo: Junior Ruben Casillas (126, 4-0, 3 pins) notched a 17-0 technical fall over Willcox sophomore Kelby Flowers for the title. It was a second title in two meets and is 7-0 with five pins.

WILLCOX – Their goal has never been to become section champions. It is a result of what fifth-year Morenci Head Coach Casey Woodall has been doing, ‘cultivating a lifestyle of excellence’ in the Wildcats.

Morenci’s wrestlers earned the Division IV – Section II title in Willcox on Feb. 3, qualifying 13 of 14 entrants for this week’s state meet in Prescott. It is the Wildcats’ seventh section title in eight years, the fourth consecutive under Woodall. The meet was postponed and canceled in 2014 due to health concerns regarding skin disease.

Morenci amassed 255.5 points, or nearly twice as many points as the runner-up teams, Benson and Willcox both with 128. Pima and Thatcher tied for fourth with 110 points apiece.

The sectional meet was the first time Morenci was able to field an entrant in each weight class this season. Senior 120-pound Cory Cota (4-0, 3 pins) and junior Nathan Willey (220, 2-0, 2 pins) were uncertain they would be in the meet days earlier, both leaving the meet as individual section champions.

Carrasco and Mark Roybal were section champions twice before; Cota and Casillas for a second time, and Dunning, Vierra, and Willey for the first time.

Carrasco drew a quarterfinal bye and pinned seniors Cody Burgett of Globe in the semifinal and Oryan Robinette of Benson in the final, both during the third period.

Mark Roybal drew a first-round bye, pinned both San Manuel junior Daniel Garcia in the quarterfinals and Pima freshman Uriel Murietta in the semifinals during the first period, and decisioned Benson junior David Ens 8-4 for the title.