Raymundo Frasquillo Photo/Gila Herald: Freshman Cody Torres (160, 2-0) decisioned Benson senior Kyler Curtis to become Morenci’s fifth section champion during the meet in Willcox Feb. 2. He recorded a takedown to break a 5-5 tie and contributed 18 of 190.5 team points for the Wildcats to earn their fifth section title under sixth-year head coach Casey Woodall. Benson was the runner-up with 140 points.

WILLCOX – The most important meet of the season, the state qualifying sectional, was capped by Morenci hoisting the team first-place award Feb. 2. Morenci’s wrestlers earned the Division IV – Section II title in Willcox, qualifying nine of 13 entrants for this week’s state meet in Prescott.

It has never been their goal to become section champions. It is a result of what sixth-year Morenci Head Coach Casey Woodall has been doing, ‘cultivating a lifestyle of excellence’ in the Wildcats. All of the regular season matches are in for this meet. “They don’t mean anything, possibly bragging rights, but they’re practice (for the state qualifying meet),” he has said.

He will say there is always room for improvement and not all of the expected finishes occurred, according to his facial expressions following some of the matches. The nine qualifiers will move on to the task at hand, to put their best foot forward and do as well as they can at the state meet Thursday, Feb. 7 and Friday, Feb. 8.

It is the Wildcats’ eighth section title in nine years, the fifth consecutive under Woodall. The meet was postponed and canceled in 2014 due to health concerns regarding skin disease. The Greenlee County boys qualified 13 of 14 entrants in 2018, 2017, and 2016. Twelve of 14 qualified in 2015.

Benson qualified nine of 11, Miami seven of 12, Willcox six of 12, Thatcher six of 13, Pima six of 10, Globe four of five, San Manuel two of four, Tombstone two of seven, Catalina two of five, Santa Rita two of three, and Bisbee one of seven. Saint Augustine had a lone entrant while Saint David, San Carlos, and Tohono O’odham had two apiece.

Mark Roybal is a 4-time section champion while Casillas has three titles and Dunning two.

Team points earned were 26 by Morales, 24 by Dunning, Casillas and Mark Roybal, 18 by Aguallo, Bray and Torres, 16 by Willey, 15.5 by Steven Roybal, four by Ortega, and three by Hudman.

Casillas drew a first-round bye, pinned Tombstone junior Lepley during the quarterfinal first period, and posted a pair of major decisions, 8-0 over Willcox senior Andrew Kee in the semifinal and 9-0 over Globe sophomore Seth Durbin in the championship.

Torres drew a quarterfinal bye and Pima sophomore Uriel Murrieta 4-3 in the semifinal and Benson senior Kyler Curtis 7-5 in the championship.

Willey drew a quarterfinal bye, pinned Thatcher senior Gauge Bryce in the semifinal period and fell by a 0-9 major to Benson junior Clayson Goodwin in the championship.

Hudman was pinned by Benson senior David Ens during the quarterfinal first period, pinned Pima freshman Gaige Cluff during the consolation first round second period, and fell by 3-14 major decision to Globe freshman Angel Hernandez in the consolation semifinal.

Arthur was pinned by Willcox sophomore Ote Allsup during the quarterfinal first period and by Tombstone sophomore Alex Guerra during the consolation first round third period.

Wagner was pinned by Pima senior Tyson Hawkins during the quarterfinal first period and by Miami senior Michael Mowrey during the consolation semifinal third period.

Ortega drew a first-round bye, Willcox senior Ricardo Cuevas 6-1 in the quarterfinal, was pinned by Thatcher senior Quinton Mack during the semifinal first period, and was pinned by Benson senior Nick Brown during the consolation semifinal period.

The state meet begins in Prescott on Feb. 8. 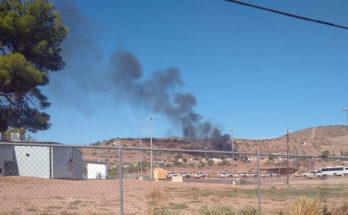