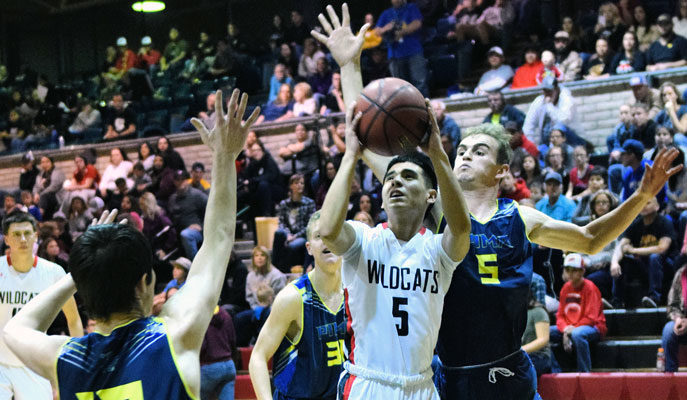 Raymundo Frasquillo Photo/Gila Herald: Jordan Leonard (5) gets a shot off between defense from Alec Judd (5) and Drew Thompson.

To do so, they will likely have to go through Pima and Thatcher yet again, as all three have been placed in the top half of the state playoff bracket.

“I’m just really proud of the guys in this accomplishment,” said Morenci head coach Patrick Hepper. “This was the first goal we had for the season . . . Most of the kids’ parents weren’t even born then, so it’s a big deal for us.”

On Friday, the Wildcats finished its regular season on top of the region by cutting down its net after beating the Pima Roughriders 56-35 in the 2A East Region Tournament Championship.

“We know how we want to play on the defensive end and we’ve been working on it for years,” Hepper said.

On offense, Ryan Hayes had a big night and led his team in scoring with 18 points. Hayes scored on drives to the basket and also hit two 3-pointers in the second half to help put the game away.

Jordan Leonard and Olmsted were their usual selves, scoring 15 and nine points, respectively.

The Wildcats outhit the Roughriders from beyond the arc 7-2, as Jordan had three and Hayes and Shawn Michael Chavez both had two compared to just two from Pima’s Alec Judd.

The game was close in the first half as Pima’s all-everything center Dawson Pruszynski was firing on all cylinders. On top of playing tough defense, Pruszynski scored early and often and finished with a game-high 22 points.

The problem is that Pruszynski got little help offensively from anyone else, with Judd having six points and three other players all having only two points to round out the scoring for the Roughriders.

“I’m just really proud of everyone just kind of sticking to the system that we have on that end of the court,” Hepper said. “Shots will go in some nights and shots won’t go in some nights, but if we just keep working on the defensive end we’ll give ourselves a chance.”

After taking a 27-19 lead at the half, Morenci opened up in the third period, outscoring Pima 17-8 behind three 3-pointers that seemed to break the Roughriders, who were riding high off a big win over Thatcher the previous night.

Pima couldn’t close the gap in the fourth, and with a minute left to play both teams cleared their benches to give the reserves some due playing time and experience.

That worked out much to the crowd’s favor, which erupted as loud as they had been all night when Jeremiah Rojas hit two layups at the end of the game.

Morenci cut down its net for taking the region tournament, but it still has one more net on its vision board, and it currently resides in Prescott.

Hepper thanked his coaches, parents and the school administration for all their support and said he looks forward to keeping the momentum going.

“It’s a nice accomplishment and a step in the right direction for our program,” Hepper said. “Hopefully, we can just continue to build from here.”