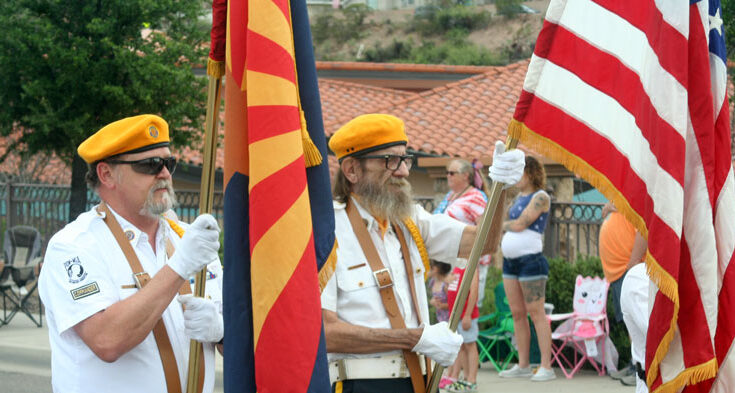 “Stars and Stripes Forever” was the patriotic theme

What more could a person want? The sky was overcast for much of the day. It made for a comfortable, enjoyable July 4 parade in Morenci.

It was indeed a very big event, especially in Greenlee County, the least populated among Arizona’s 15 counties.

The “Stars and Stripes” parade was long and had plenty of patriotic-themed entries. It was sponsored by Freeport McMoran Inc. It is one of the largest mining companies in the world and is traded on the New York Stock Exchange. Morenci is its flagship mine, employing thousands of people.

Smiles? There were too many to count with hundreds of spectators lining both sides of Burro Alley for about a mile. Some said it was “perfect” weather with clouds blocking what would otherwise quickly become a hot, scorching sun. The parade started at 8 a.m. but considering this is Arizona it would not take long for the outdoor temperature to become uncomfortably hot. The temperature was in the comfortable 80s when the parade began.

The parade was particularly delightful for younger children. Many hands full of candy were tossed from most of the parade entries. Morenci fire trucks rolled near the parade’s front. Children scrambled for the sweets. Safety? Candy was thrown far enough from vehicles so there was no danger to kids.

The parade was led by the symbol of solid American patriotism: the Color Guard from Clifton-Morenci Lloyd C. Hill American Legon Post 28. The flag bearers were Bill Carlson, Bob Jackson, and a youngster from the Sons of the American Legion.

Then came the parade’s Grand Marshal Dr. David Woodall. He is the retired Morenci Schools superintendent. He retired at the end of this school year. Woodall was highly respected and popular in the community. He rode in an antique gray Jeep and was smiling and undoubtedly having fun as he tossed candy along the parade route.

Woodall was a long-time member of the Morenci staff serving as a teacher, athletic coach, and superintendent. His legacy includes Morenci Schools being among the highest achieving schools in Arizona. He was known to never raise his voice in anger but via his professional demeanor set an example for student discipline among principals in the district’s three schools.

The Morenci Volunteer Fire Department had a strong showing with its fire trucks, big and small, sounding their sirens and flashing lights. Firefighters were among what was probably the most popular parade entry as those on board tossed large quantities of candy as they rode along Burro Alley.

The many parade entries followed the day’s celebration theme of “Stars and Stripes Forever.”

Many people wore T-shirts with the day’s theme. A majority were children and there were many adult women who also wore the shirts. That was probably because the shirts were too small for men.

Everyone headed to the Morenci Plaza Loop where the Morenci Fitness Center Starbucks, library, theatre, and Morenci Club are located.

Fun? Absolutely. That included a bucking shark in-lieu of the traditional saddled bronco. A great many youngsters, and a few young adults, tried their best but everybody eventually was thrown onto the air-cushioned floor. Another of the biggest attractions was a tall, inflated slide. Sliders climbed to the top on a staircase in the middle of two slides. Children were lined up anxiously awaiting their turns to climb and slide down.

It took only a few seconds to slide. Every slider wore a big smile upon accomplishing the goal of reaching the bottom.

Food? There were several vendors. One of the most popular was that of the American Legion Post 28. It sold hamburgers and fries. The burger patties were thick and juicy. Patrons also had the option of having cheese and green chile added to their burgers. A can of soda pop was optional.

Starbucks was very, very busy. Soon after the parade, there was a long line of folks ordering their favorite drinks.

For those buying burgers there was many a choice. A large canopy under which there were tables was ideal as folks sat under cover to enjoy their meals.

Many folks enjoyed visiting with friends, neighbors, and co-workers at the giant Freeport Morenci copper mine. Some caught up with each other’s doings as they know each other but work in the many different departments. That can make it difficult to visit after a long day of work and the need to rest at home and spend time with their families.

Several folks had babies in strollers and there were toddlers who only recently began to walk. The little ones were no doubt the topic of discussion. Faces often beamed as they spoke of their new or recent arrivals.

The sun came out around noon and then intermittently. Most of the day was enjoyed by a return of the cloud cover.

In the evening a heavy rain hit, causing everyone to take cover, of which there was not much other than two large canopies.

The Morenci July 4 is always topped off at night with a spectacular fireworks show put on by Morenci firefighters. Would the rain cause that to be canceled?

It was only delayed. The rain stopped and the show started around 9:45 p.m. That allowed folks to gather outdoors and watch the show.

Overall, a good time was had by all.