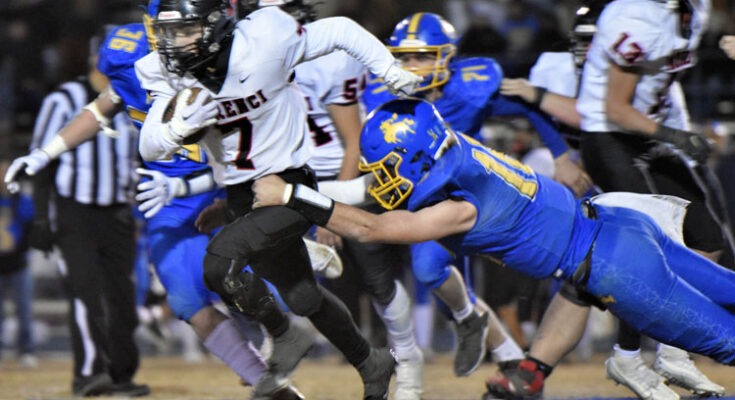 Raymundo Frasquillo File Photo/Gila Herald: Michael Casillas (7) gets taken down by Pima’s Seth Russell in the 2A State Championship game. The AIA has reclassified Morenci into the 3A Conference with Safford and Thatcher. The school has until Jan. 5, 2023, to appeal the decision.

PHOENIX – After two consecutive years as the bridesmaid in the 2A State Championship games, the Morenci Wildcats football team has been moved up to the 3A conference in the Arizona Interscholastic Association’s (AIA) initial football conference placements.

The AIA football reclassification committee made the decision and released it on Thursday. Schools have until Jan. 5, 2023, to appeal the decision. The reclassification is for football only, and Morenci would remain in the 2A Conference in all other sports. So far in this new format, no school has had a successful appeal to being moved up a conference.

If the placement stands, Morenci will join Safford and Thatcher in the 3A Conference. Safford just missed the playoffs this year, and Thatcher went unbeaten until the championship game and finished as state runner-up. This year’s 2A State Champion Pima remains in the 2A Conference.

The 2021 2A State Football Champion Arizona Lutheran and Parker were moved up to 3A this year, but both have been moved back down to 2A in the new reclassification per AIA bylaw.

Benson was also moved up to 3A from 2A, while Chinle, Coronado, Cortez, and Tuba City all moved down from 3A to 2A. Those teams are all slated to remain in their current classifications.

3A State Champion Eastmark was moved up to 4A.