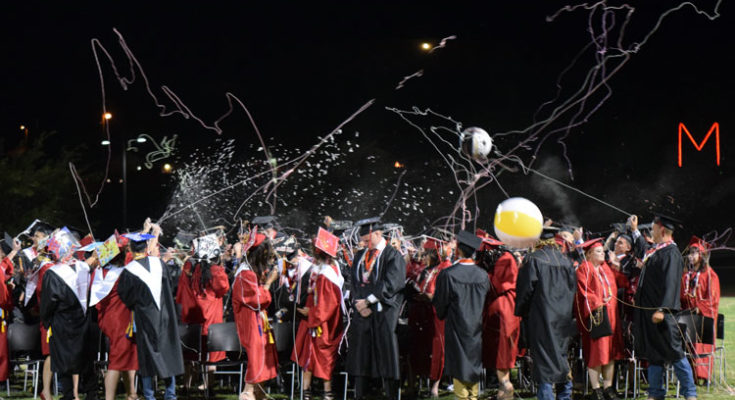 Raymundo Frasquillo File Photo/Gila Herald: The 2020 grads did not get a few moments to unwind en mass, spraying silly string at one another and bouncing inflated balloons for several minutes, then gathering at mid-field for a group final farewell, and welcoming well-wishers onto the field, as had previous classes in Lawson Stadium.

Editor’s Note: This article was unintentionally delayed due to the reporter’s computer being infected with a virus, requiring it to be serviced.

MORENCI – The Lawson Stadium field lights were in the off position for the long-ago scheduled commencement exercises May 22. A few days prior, the Wildcat Memorial Gymnasium front doors were locked on the evening the baccalaureate ceremony would have been held. Neither facility had the standing room only crowds of previous years. The two public events were victim of the current global health crises requiring no large gatherings, maintaining social distancing, and donning face masks in order to “slow the spread.”

Instead, the “top-tiered technology-based” Morenci High School had its’ 115th graduating class hold a virtual ceremony on the same date, with Class of 2020 members giving speeches, valedictorian Keanna Cortez and salutatorian Shaun Espinoza, as well as all school administrators and board members offering words of wisdom to the graduates. The keynote speaker was math faculty member and 2005 MHS grad Alexa (Zerwas) Aguilera.

“All have the potential and tools to make your wishes come true,” Principal Bryan Boling said during his closing comments. “As a small fish in a big pond, it is important to swim fast.”

He announced stepping down from his 17-year position that caps a 30-year educational journey. Outdoor fireworks concluded the evening. The 2020 grads did not get a few moments to unwind en mass, spraying silly string at one another and bouncing inflated balloons for several minutes, then gathering at mid-field for a group final farewell, and welcoming well-wishers onto the field. Instead, their final group activity was parading through Morenci and neighboring Clifton earlier in the afternoon, escorted by area law enforcement officers and first responders, smiling and waving at onlookers.

However, several class members asked to have something more. Their request was granted. An on-campus “walk across the stage” in front of Wildcat Memorial Gymnasium was held the following evening. It was the opportunity for grads to attain what was missing. They wore their sense of accomplishment expressions in front of others. That is what had been missing.

The 2020 grads disembarked vehicles one at a time in front of faculty members and emerged through an inflatable tunnel. The unique ceremony had 1973 MHS grad Roger Munoz playing Pomp and Circumstance on guitar as they headed out of the tunnel, and walked across an appropriately decorated stage. Their principal elbow bumped each and handed their diploma before posing for a photograph.

They received a “goodie” bag from class sponsors Marilou Cortez and Krista Mahan, and had a souvenir image taken with family members. Their most important supporters, those fitting in the same vehicle, were able to share the moment and pose for souvenir images.

In the previous ceremonies, at least since the school opened for the 1982-83 school year at the present site, the principal announced each soon to be alum before they stepped onto the stage, and board members handed out diplomas and posed for pictures.

“It will be something they’ll remember the rest of their lives,” Boling said. “No other class can say they had this, because of the (Covid-19) pandemic.”

Starting its final year of high school in late July, as penned by a class member on a personal parking space, the Class of 2020 was “running late but still on time” for the first day of classes.

Their senior breakfast was prepared and ready, but eating utensils were overlooked and an unplanned delay ensued while that was remedied. They made it to their first hour classes before the session ended, running through a gauntlet of classmates, faculty members, friends, neighbors, and parents before beginning required individual class orientations.

The first, second, and third nine-week grading periods largely went as scheduled with fall and holiday breaks in between.

Prior to the start of the fourth quarter, the spring break was extended a week and their final weeks of in-class learning sessions were called off by the state governor. A final run through the halls, as they opened the year, to signify completion of their course of study, were among the events missed in that span.

Now, also as penned by another class member on a personal parking slot, “We out(ta) here.” That student initially ran out of paint and then out of time to complete the artwork and message.

Thirty class members left school as members of honor societies attained through grade point averages. One student left with six memberships, one with five, eight with four, four with three, 10 with two, and six with one apiece, as signified by cords, tassels, and hoods worn for the graduation ceremony.

Twenty-one class members were offered over $1.2 million in scholarships, three totaled a six-figure sum, 12 a five-figure sum, three a four-figure sum, and three a three-figure sum, to help realize their dreams.