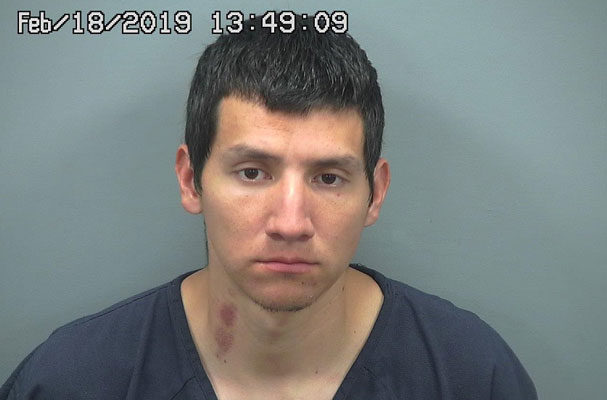 Contributed Photo/Courtesy GCSO: Jacob Rios was booked into jail after fleeing from police.

SAFFORD – Jacob Matthew Rios, 29, was arrested and booked into the Graham County Adult Detention Facility on Feb. 18 after evading the long arm of the law for a week.

Rios was wanted on two outstanding warrants regarding separate charges of aggravated DUI and theft as well as for questioning regarding a robbery and aggravated assault where the victim was a former lover.

Rios allegedly assaulted the victim the morning of Feb. 11 while she was bringing over a child they have in common to visit with him. The victim said Rios became agitated and appeared to be going through drug withdrawal. She said he struck her in her eye, took $40 out of her wallet and fled on foot. The victim received medical attention at Mt. Graham Regional Medical Center, where she had stitches to close a laceration under her right eye.

A search for Rios yielded fruitless until Feb. 18, when an officer noticed Rios walking west on 11th Street at about 11:12 a.m. When the officer stopped to approach Rios, the suspect ran to 8th Avenue and headed northbound into the backyard of a residence, according to the officer’s report. Rios then crossed 8th Avenue and ran onto the Safford Middle School property. The officer continued to chase Rios south on 7th Avenue and west on 12th street, where Rios then went northbound into a residential backyard again.

This time there was an aggressive dog which nearly bit Rios, but the suspect jumped a second fence and east toward 7th Avenue. The officer ran along the top of the fence to avoid being bitten by the dog and chased Rios into an area where other officers were lying in wait and he was taken into custody.

While being searched, officers located a used hypodermic needle in Rios’ pocket. Rios reportedly advised he used the needle the previous day to inject heroin. When asked why he ran, Rios allegedly said he did so because he did not want to return to prison.

After Rios was interviewed regarding the robbery incident, he was transported to the jail and booked on his warrant as well as charges of robbery, aggravated assault/domestic violence, disorderly conduct/domestic violence, and possession of drug paraphernalia.