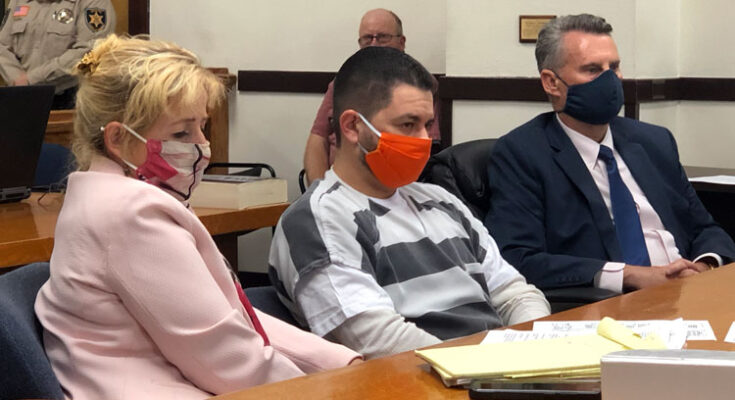 Jon Johnson Photo/Gila Herald: Eduardo Montano Jr., center, listens during his sentencing along with his attorneys, Daisy Flores, left, and Dennis McCarthy. Montano was sentenced to 33.75 years for the killing of Matthew Misener.

SAFFORD – Eduardo Montano Jr., 36, of Tucson, was sentenced by Graham County Superior Court Judge Michael D. Peterson on Monday to 33.75 years in prison for the murder of Matthew Gerald Misener, 35.

Montano was initially charged with murder in the first degree after Misener was gunned down as he was on his way to work at the Morenci mine on an early Monday morning in February.

According to his plea agreement, Montano agreed to be sentenced to the maximum term of 25 years on a charge of murder in the second degree and a consecutive sentence of an aggravated term of 8.75 years for a charge of aggravated assault for a total of 33.75 years in prison.

Montano accepted his guilt and signed the plea agreement in the Graham County Superior Court on Sept. 9 with Judge Peterson presiding. Judge Peterson also served as the settlement conference judge in the matter, which led to the plea agreement. Montano was represented by attorneys Daisy Flores and Dennis McCarthy, while the prosecution was performed by Greenlee County Attorney Jeremy Ford.

According to the plea, Montano will serve a flat time of 25 years and then will have one day off for every six served on the 8.75 years sentence. He was also ordered to pay restitution of $1,919 for funeral expenses and may have to pay more restitution to be settled later.

During the hearing, Judge Peterson praised the victim’s family for their decorum in the court and thanked them for expressing themselves.

Misener’s mother, sister, brother, and fiancée all spoke at the sentencing, as well as Misener’s co-worker, Samuel Rivera, who was supposed to be in the vehicle with Misener but had called off that day. Rivera said he had worked with Misener for the past three years and that he had grown closer to him than any previous co-worker he’s had for the past 15 years.

“I’m lucky to be here,” Rivera said. “You hurt this whole family and took a good friend away . . . I hope you never come out. You took someone away from all of us who we really cared for.”

Misener’s sister, Christy Perkins, said her brother would have “given his shirt off his back” to help a person in need and that Montano was duped into getting involved in a custodial situation between Misener and his ex-wife, Georgina Misener.

“You took away somebody who meant so much to all of us,” Perkins said. “You took his life away from all of us.”

Misener’s mother, Jeanne Anderson, expressed her desire that Montano spends the rest of his life behind bars.

“I despise him (Montano), and I hope he spends the rest of his life in jail and never have an opportunity to see daylight,” she said. “You don’t know what you did to us – to your own family – to those children, my grandchildren, who don’t have a father now . . . We’re all still in a state of shock. I cry every day.”

Misener’s brother, Sean Misener, called Matt his best friend, brother, workmate, and someone was always his rock to help him through tough times.

“Now I have to be that rock for myself and the rest of my family,” Sean said. “I hope he feels every bit of emotion, including the love and anger, his entire 30 years he spends in that cell and that it consumes him from the inside. And I hope he does not make it out.”

Misener’s fiancée, Nicole Chacon, said she would make sure Misener’s children knew who took their father’s life and that she hopes they hate their mother for her part in the killing.

“I pray that they will hate her,” she said.

Misener was driving a black, Chevrolet Tahoe on U.S. Highway 191 and was shot as he began to enter the “Horseshoe Curve” between Clifton and Morenci. The incident took place just before 5 a.m. on Feb. 10, and the Clifton Fire Chief called it in after noticing the bullet-ridden vehicle. Other citizen responders in the area also stopped to help and then noticed the vehicle had been shot.

The investigation into the shooting led to Montano, who was arrested in Tucson and brought back to Greenlee County, where he was held on a $1 million bond.

According to the factual basis of Montano’s plea agreement, he admitted to conspiring with Misener’s ex-wife, Georgina Misener, to injure Matthew so he would miss attending a court hearing regarding the custody of his children. Montano admitted that he ambushed Matthew and fired multiple shots from a 9 mm Ruger handgun, which killed the victim.

Georgina, 34, of Tucson, has maintained her innocence and is still being adjudicated on charges of murder in the first degree and conspiracy.