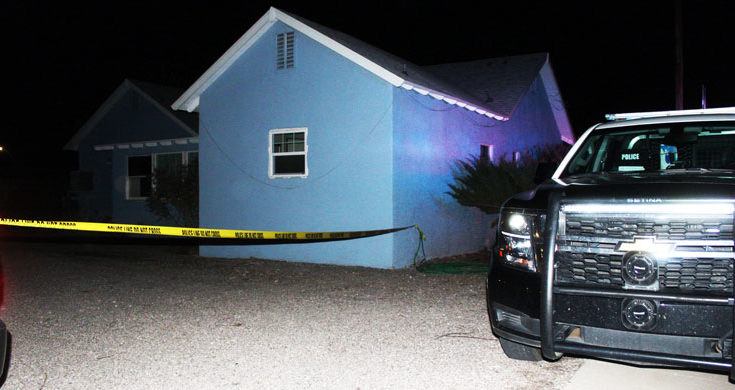 Jon Johnson Photo/Gila Herald: Safford Police cordoned off this residence at the intersection of 14th Avenue and U.S. Highway 70 after the body of Harrison Vandever was found deceased Dec. 31, 2019.

SAFFORD – The search for a missing homeless man ended New Year’s Eve, as Harrison Vandever’s body was located deceased at a residence in Safford. The family has been notified.

Safford Police cordoned off a residence at the southwest corner of the intersection of 14th Avenue and U.S. Highway 70 on Dec. 31 with crime scene tape connected to its patrol SUVs. The residence was cordoned off due to the discovery of Vandever’s deceased body in the backyard in a crawl space of the residence.

According to Safford Police Chief Joe Brugman, Graham County’s local medical examiner concluded that Vandever died from natural causes. A police report released Jan. 6 advised it appeared that Vandever had aspirated on his own vomit and that no signs of foul play or severe injuries were present.

Detectives arrived at the scene shortly after the Gila Herald at about 7 p.m. and were just starting to process the area. According to Brugman, the ensuing examination concluded that Vandever died from natural causes.

Vandever, 34, was previously last seen Dec. 20, 2019, at a homeless camp behind the Valley Motel at 1050 W. Thatcher Blvd., where he was reportedly involved in an altercation that left injuries to his head and face.

A GoFundMe fundraiser to help the family with funeral costs has been set up here.

This article was corrected to change Vandever’s age from 35 to 34. Vandever would have turned 35 in January. It was also updated Jan. 6 to include information from a Safford Police report.