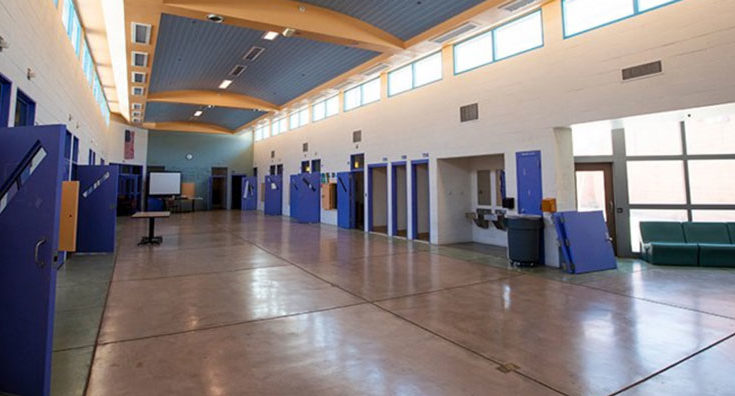 Photo By Randy Metcalf/Pima County: On Aug. 6, the Pima County Board of Supervisors will decide whether to lease an unused section of the county’s Juvenile Justice facility to Casa Alitas, part of Catholic Community Services in Tucson, to serve as a short-term shelter for migrants seeking asylum.

TUCSON – Casa Alitas, a nonprofit program that offers short-term shelter to migrants seeking asylum, is poised to move from a former Benedictine monastery to an empty juvenile detention center.

“That monastery has been purchased by a private developer and will begin to be developed sometime in August,” Pima County Administrator Chuck Huckelberry said. “Therefore, it’s no longer available as a central processing center for asylum seekers.”

“What’s being proposed is to turn over three units to Catholic Community Services to continue to operate their central shelter and processing facility that will house up to 300 migrants and about 50 volunteers per shift,” Huckelberry said. “In addition, because of the centralized complex, it has a commercial kitchen, it has commercial laundry.”

Catholic Community Services of Southern Arizona, which oversees Casa Alitas, needs to provide meals and laundry services to the migrants under its care, he said.

He said Pima County has applied for a humanitarian aid grant from the Department of Homeland Security that would cover the operating costs of the facility, keeping taxpayers from bearing the burden.

The proposal goes to the Pima County Board of Supervisors on Aug. 6. Kozachik and Huckleberry are confident supervisors will approve it, giving Catholic Community Services an annual lease, renewable for four years.

The monastery already was crowded because of the sheer number of asylum seekers served by Casa Alitas, which began housing migrants there in January. On particularly busy days, local churches and even Kozachik’s office were used as overflow space.

“For the last four years, up until January of this year, we saw about 6,000 people come through the city,” Kozachik said. “Since January, and since we moved into the Benedictine monastery, we’ve run over 12,000 people through.”

Huckelberry said the number of migrants seen by the county has jumped from 20 daily to 200 daily, overwhelming the system. The housing is meant to be transitional, with most migrants moving on in two to three days to travel to other parts of the country, where family and sponsors are waiting for them.

Although the term “juvenile detention facility” can sound abrasive, Huckelberry said the facilities aren’t like a jail.

“People need to understand the difference between a juvenile detention facility and an adult jail. There’s a night and day difference,” he said. “On top of that, this facility looks a lot like a college dormitory. It doesn’t have locks on the doors, it will be operated 24/7, 365 days a year. It will have amenities dealing with TVs and lounges, so it is the furthest thing from a jail.”

In addition, Kozachik said the organization will be working on renovations and remodels to improve the space, such as adding carpeted floors and painting the walls.

“The look will be completely different than it was even five or six years ago when juveniles were staying there,” he said.

“The history on this is that we have been working on this issue for five years,” he said. “This began literally out of the waiting room at the Greyhound bus depot down by the convention center.”

ICE dropped migrants off at the bus depot where aid groups like Casa Alitas would meet them to help them transition to the U.S.

The group later put a double-wide trailer at the station, then began sending migrants to multiple churches in the area before finding a semi-permanent home at the old Benedictine monastery.