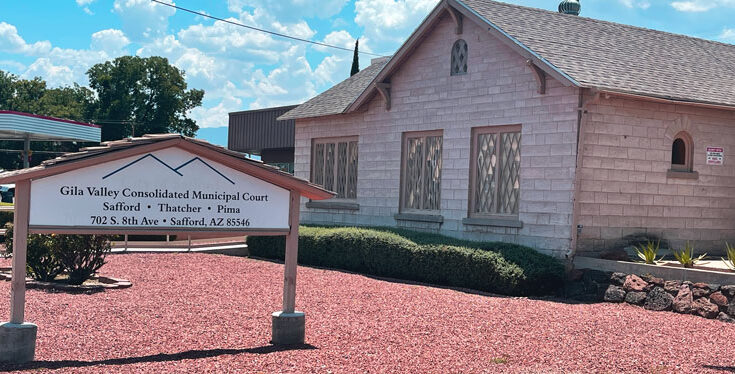 SAFFORD – An autopsy report from the Pima County Office of the Medical Examiner has listed the manner of death of a man who died in Safford Police custody as “undetermined.”

Nathaniel James Gomez, 33, formerly of Morenci, died in the early morning hours of July 7 after being found naked and bloody in a Safford resident’s yard.

According to Pima County Medical Examiner Dr. Gregory Hess, the cause of death was attributed to “the combined effects of methamphetamine intoxication, airway obstruction by foreign material, sharp force injuries, and exertion secondary to physical altercation.”

It’s that last part that has the Arizona Department of Public Safety still investigating the death. The exertion secondary to physical altercation appears to be describing Gomez’s actions after being approached by officers.

The autopsy and toxicology report listed methamphetamine intoxication with a positive result for meth of 3,900 ng/mL of blood. The report also listed several “sharp force injuries” on Gomez’s scalp, right hand, and right wrist. As well as “blunt force injuries” on the upper and lower extremities. The toxicology report advised blood levels of 200-600 ng/mL have been reported in methamphetamine abusers who exhibited violent and irrational behavior. High doses of methamphetamine can also elicit restlessness, confusion, hallucinations, circulatory collapse, and convulsions, according to the report.

According to a press release that day from the SPD, officers were initially dispatched to the 700 block of 9th Avenue at about 4 a.m. on Thursday regarding a reported attempted burglary.

Upon arrival, officers encountered a man covered in blood acting “out of control and delirious,” according to the release.

While attempting to provide medical attention, the subject became combative and officers used a TASER and pepper spray to subdue him.

Medical professionals then attempted to give aid but the subject never revived and was pronounced deceased at the scene, according to the press release.

Further information from law enforcement in the history provided for the autopsy lists that Gomez was reported to police when he was found in the front yard of a local residence standing nude and covered in blood. The investigation also lead to the Gila Valley Consolidated Municipal Court building at 702 S. 8th Avenue. The building had been breached and inside was a horror show of bloody walls and damage throughout.

Doors were smashed, desk material strewn about and the walls were sprayed with what appeared to be Gomez’s blood. Investigators believe Gomez may have injured himself during the courthouse break-in, causing all the blood on the building and himself when he was found.

Upon police arrival, body camera footage reportedly shows Gomez behaving erratically in an agitated manner. Gomez then consumed unknown paper products, which led to his airway obstruction – which was one of the causes listed for his death.

The autopsy report listed the officers’ use of pepper spray and TASER had minimal effect on Gomez, but that his breathing became more labored as time passed following swallowing the paper. Shortly after officers handcuffed Gomez, he became unresponsive. EMS was standing by on the scene and had to remove the airway obstruction before being able to intubate Gomez to breathe for him, and he failed to be resuscitated.

The DPS investigation into the death of Nathanial James Gomez is ongoing.