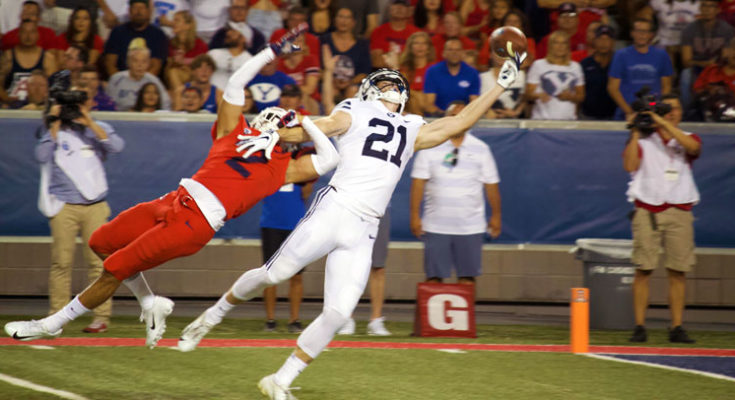 TUCSON – That wasn’t supposed to happen.

Brigham Young University (BYU) came into Arizona Stadium a 12 point underdog with most just hoping they would cover the spread.

They did that and more as the Cougars opened the Kevin Sumlin era at UA with a loss, 28-23.

Even more surprising was how Heisman hopeful Khalil Tate seemed to shun the run and instead attempted repeated deep passes downfield, sometimes into double coverage. It was almost Tate wanted to be seen as more than a running quarterback and felt he could prove that against BYU. He didn’t.

In the post-game press conference, Sumlin refused to comment on the perceived poor play from Tate.

“I never ever talk about a quarterback’s performance right after the game,” he said. “Until I get back and look at the video, there are a lot of things that go into that. Was he flushed? Was he able to set his feet and make the right reads? Were guys at the right depth? There’s 10 other guys out there that are responsible for his success. Sometimes he’s cleaning up some other mistakes, too. I’ll be able to answer that better on Monday.”

BYU head coach Kalani Sitake gave the game ball to the offensive line after the game and commented on how well they did with their blocking. He said BYU is a different team this year.

“The best part about it is (we’re) competitive,” Sitake said. “The start of the game didn’t go as well as we thought it would go.”

While Tate scored with his arm and legs – he threw a TD in the second quarter to put Arizona up 10-7 going into halftime – he was outplayed by BYU’s Tanner Mangum, and nobody – especially BYU fans – saw that coming.

Mangum was 18-28 for 209 yards, with 1 TD and no interceptions. He led three drives in the third quarter that put the Cougars up by 18 and managed the clock when they needed it the most.

Conversely, Tate was 17-34 for 197 yards, with one passing TD and one rushing TD, but only had 14 total rushing yards. For a quarterback who wowed the college football world with his feet last year, it was a tremendous drop-off in performance.

Both teams appeared sluggish at the onset, with neither finding the end zone in the first quarter.

BYU shook off the cobwebs first and broke the ice after being set up nicely on a big third-down pass play.

Squally Canada scored his first of three TD’s on the night with an easy 2-yard jaunt to put BYU up early in the second quarter. Canada would finish with 98 yards rushing.

UA came back by moving the ball swiftly with its hurry-up offense and Tate scored his passing TD late in the second when he hit Tony Ellison for the 15-yard score to put the Cats up 10-7 at the half.

The third quarter was all about the Cougars, however, and its big offensive line pushing the Wildcats around.

And when the Wildcats put the Cougars in passing situations, BYU answered with big plays.

Facing a third and 12 on their first possession of the second half, the Cougars’ Dylan Collie stayed with a deflected pass and caught it to the delight of the bench. The drive was capped on the very next play when Mangum hit Tucson native Matt Bushman in the end zone for a 24-yard TD to put BYU up, 14-10.

BYU capped off its big third quarter with Canada punching it in from 1 yard out.

Down 28-10, the Cats didn’t roll over and instead started a comeback in the fourth quarter that made the BYU fans worried.

After a 2-yard TD by Tate and a 1-yard dive TD by JJ. Taylor, the lead had evaporated to just five points and the BYU faithful had their hats in their hands wondering if their beloved team would snatch defeat from the jaws of victory.

The worry turned out to be unfounded as the offensive line opened up enough holes for Canada and others to run off the remaining clock, and BYU left ecstatic with the 28-23 win.

Arizona will look to bounce back at Houston on Saturday. To view a photo album from the game, click here.