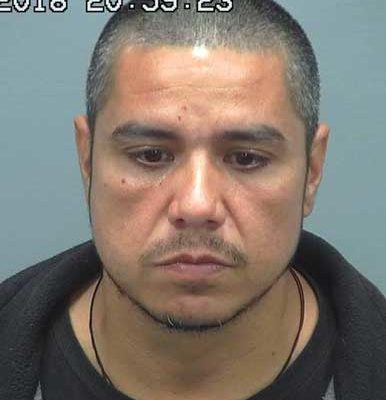 Contributed Photo/Courtesy GCSO: Marcus Perea was booked on a warrant and was found in possession of meth and a pipe.

SAFFORD – A man with a warrant was apprehended Monday, April 9, with 2.5 grams of meth in his possession but claimed the meth couldn’t be his because he believed he had a lesser amount.

According to a Safford Police report, Perea was walking on 20th Avenue near Walmart at about 7:41 p.m. when an officer on patrol noticed him and knew he had an active warrant.

As the officer placed Perea under arrest, he asked if he had any contraband on him and Perea allegedly said he had a meth pipe in his sock and a quantity of meth in his wallet.

After retrieving the pipe, the officer looked through Perea’s wallet and located a baggie containing approximately 2.5 grams of meth.

Perea denied that meth was his and said he knew it wasn’t because he had a lesser amount. He said someone must have placed it in his wallet.

Perea also said he was just holding the pipe for a friend. He admitted it had been used to smoke meth but denied smoking from it himself.

Perea was then booked into the jail on his warrant and the pipe and meth were sent for testing at the Arizona Department of Public Safety’s Crime Lab in Tucson.