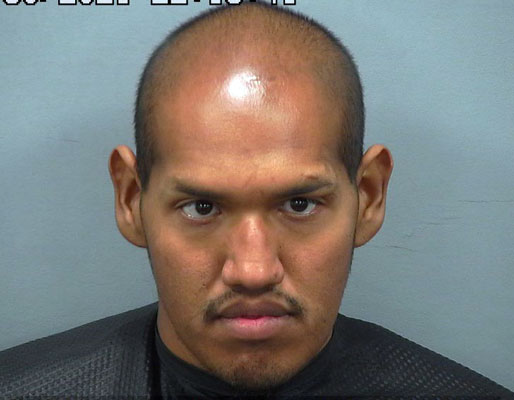 Contributed Photo/Courtesy GCSO: Michael McCaslin had just been released from jail when he allegedly stole some beer and a car and then fled from pursuing police.

Driver is also a suspect in a beer theft

SAFFORD – It took roughly only an hour after being released from jail for a man to be suspected in stealing beer from a convenience store and then conveniently stealing a running, unlocked car.

Michael Shane McCaslin, 26, had just been released from jail about an hour before police received calls regarding a stolen car.

McCaslin was previously arrested March 30 and, after being released from the Mt. Graham Regional Medical Center, was booked into the Graham County Adult Detention Facility. On April 1, he was officially charged with theft of means of transportation, unlawful flight from pursuing law enforcement, endangerment, and criminal damage. McCaslin was in jail after being arrested on March 26 by Thatcher Police regarding a shoplifting incident.

McCaslin is also a suspect in a beer theft from a convenience store on March 30, and a search of the crashed vehicle yielded two cases of Budweiser beer (with two empty cans). The beer and McCaslin’s description match a shoplifting report from the Speedway gas station at 105 E. U.S. Highway 70.

According to a Safford Police report, an officer responded to a business at 201 E. U.S. Highway 70 at about 11:48 a.m. on March 30 regarding a stolen vehicle. Upon arrival, the victim advised she had left her white Nissan Altima running and thought she had locked the door prior to entering the business. She said she was inside for about 15 minutes and when she left she realized her car had been stolen.

While still being interviewed by the officer, the victim noticed a white, Nissan Altima traveling eastbound on U.S. Highway 70 and advised she believed it to be her car.

A Safford officer was already behind the Altima and, after confirming the license plate number, attempted to make a traffic stop.

The driver, later identified as McCaslin, initially pulled over but once officers got out of their patrol vehicles he gunned the Altima and fled.

The chase hit speeds of about 90 mph as McCaslin fled southbound on 1st Avenue (U.S. Highway 191) in 35 mph and 45 mph zones, where an attempt to puncture the car’s tires was unsuccessful.

The officer reported reaching a speed of 110 mph as he went south of Safford on U.S. Highway 191. The chase ended when the Altima became high-centered on a pile of boulders a few miles south of the intersection with Highway 366 (Swift Trail). A pursuing officer reported seeing McCaslin go off the side of the road several times and into oncoming traffic before crashing. The officer reported seeing McCaslin go off the right side of the roadway and then overcorrect, going across both lanes of traffic and narrowly miss a northbound truck. The Altima then went airborne off the roadway’s left side, dropped down into a ravine, and continued until being high-centered.

Upon contact, McCaslin complained of back pain and was taken to MGRMC for treatment. McCaslin reportedly suffered cracked vertebrae in the crash.

While at the hospital, McCaslin allegedly advised he had walked straight to the Speedway gas station after being let out of jail and stole two cases of beer. He then came upon the Nissan Altima and said he took it because it was running and the door was unlocked. McCaslin advised he started drinking the beer after stealing the car and that he was just trying to make it home when the officers attempted to pull him over.

He was then booked into jail on the theft of means of transportation and related charges, with additional shoplifting charges pending.