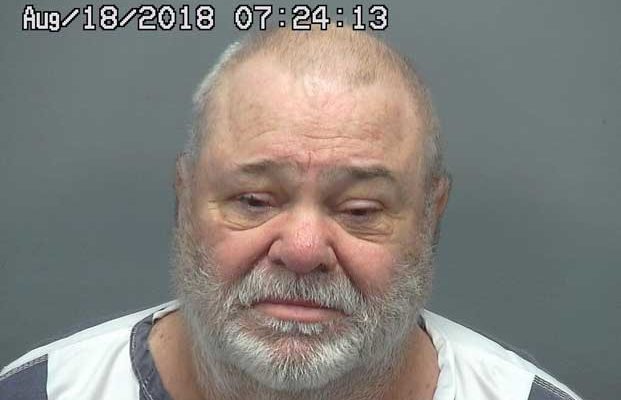 Contributed Photo/Courtesy GCSO: Robert Layton allegedly threatened police and a town councilor before arriving at a Thatcher school dance with a handgun.

GRAHAM COUNTY – The man who allegedly brandished a handgun at a Thatcher school dance Friday, Aug. 17, previously threatened a Graham County Sheriff’s Office deputy and a Thatcher Town Council member for not clearing the dance.

According to a Sheriff’s Office report, a deputy was instructed to call a residence on W. Mullins Lane at about 10:27 p.m. regarding a noise complaint. Robert Layton, 72, complained about the music from the dance interrupting his sleep and demanded the deputy shut down the dance. The residence is nearly a mile away from the school as the eagle flies.

Layton allegedly was “extremely” upset that “the youth of Thatcher High School” were allowed to play music that loud at night. He told the deputy that he would make a complaint in Justice Court against the school and the deputy first thing Monday morning.

The deputy advised that he would conduct an investigation and determine if the event was sanctioned by the school. He then told Layton that if it was not, he would contact the Thatcher Police Department to handle it since it was in its jurisdiction.

Layton then demanded the deputy give him his name, and after doing so, Layton allegedly threatened the deputy.

“Good, I need to know whose (expletive deleted) I’m going to kick first thing Monday morning,” Layton said, according to the deputy.

After advising Layton that it was unacceptable to make threats against him, Layton allegedly replied, “I don’t care who you are. I’ll kick your (expletive deleted) first thing Monday morning.”

The deputy advised he stop speaking with Layton if he continued to threaten him and, as Layton railed off a new stream of profanity, the deputy ended the phone call, according to his report.

The deputy then made contact with a Thatcher officer and informed him of the situation. Both the deputy and Thatcher officer responded to the Thatcher High School parking lot and deemed the volume of the music to be reasonable for that time of night.

At that time, Thatcher Councilor Ryan Rapier also arrived at the dance. He said Layton had called him as well and said Layton told him he would disturb the councilor’s peace if his (Layton) peace was disturbed.

Rapier allegedly said he didn’t think the music was too loud and told the Thatcher officer that he didn’t want him to shut down the dance.

The deputy then left the school parking lot at 11:35 p.m. Ten minutes later, County Dispatch advised an elderly man was at the dance with a firearm and was fighting with another subject. See Gila Herald: Gun brandished at Thatcher school dance – Aug. 18.

At about 11:38 p.m., the deputy arrived back at the high school and saw Layton in handcuffs and in the custody of a Thatcher Police officer, who had also taken Layton’s 9-mm handgun and placed it in his patrol car.

Layton allegedly yelled that he was upset and that he knew he would get the music shut off if he arrived at the school with a gun. He said since nobody from law enforcement or the town would help him he took the matter into his own hands. Layton reportedly suffers from Alzheimer’s disease and has been sickened by other ailments for at least the past five years.

After securing Layton, the Thatcher officer transported him to the jail, where he was booked for disorderly conduct with a deadly weapon, misconduct with a firearm, criminal damage, and aggravated assault.